The Zombies of Today w/ Death by Books & Tea

By Death, Books, and Tea !
Thank you Darkfallen and Greta for having me here! Today I’m going to talk about zombies. Zombies, like all paranormal creatures, are open to many different interpretations. They can be eyes glazed over and relatively intact, or could be corpses raised by a necromancer, or they could be something else. My personal favourite type are the ones that some people first think of: shambling, grey, in various states of decay, and hungry. Why? I’m not entirely sure, but there’s something enjoyable about something that should be six feet under, on the ground, not quite alive and wanting brains.


The way they’re used is almost always the same. Ok, there is some zombie romance out there. Bad Taste In Boys by Carrie Harris, and Dearly Departed by Lia Habel spring to mind. But it seems that things more like lycanthropes and angels get a little more action in the romance area than living impaired creatures. What about vampires, which are most likely the first creatures that come to mind when thinking about paranormal romance due to the success of Stephanie Meyer’s Twilight. Yes, vampires do tend to get a lot of romance while also being living impaired. But I think that’s because most people don’t like to have body parts falling off their partner; a problem that you don’t get with vampires, you do get with zombies.


Of course, that’s the romance side. On the flip side of the uses for paranormal creatures, they do it just fine and plenty often enough. And of course, that flip side is the horror. The screams. The people running away from things considerably slower than them. On a global scale, it’s never a vampire hoard ending the world, or a pack of lycanthropes brining about Armageddon. It’s always zombies causing mass destruction on a global scale.


As you can see in books such as Charlie Higson’s the Enemy series or Alison Hewitt is Trapped by Madeleine Roux, zombies bring survivors together in such a way that threats from other creatures don’t. A death by zombie is bloody, brutal and undignified, in a way that you just don’t get with faeries, sirens, or anything else. And people tend to be rather unwilling to sacrifice humanity for this fate. Should one choose to become a vampire or a werewolf, you get speed and strength as well as the downside of requiring blood or turning furry once a month. With a zombie, you get neither-just the inability to fall down when hit with anything short of an axe round the neck, and an intense craving for brains. And humans don’t want this to happen to them. They will do anything to avoid this fate. The zombie brings humans together.


In conclusion the zombie is a great creature. There are very different to other creatures, and underneath the umbrella term of zombies you get many different types of zombie. And despite the fact that they have been somewhat shoved aside in young adult literature in favour of shapeshifters and bloodsuckers, now that their idea reserves are drying out, we are seeing zombies rise. They are becoming more common, and bringing a bit of true horror adventure to bookshelves dominated by romance. So it has started. The time of the zombie has come. Long live the zombie.

Stop on by Death Books & Tea  for a week long Halloween event...
It starts today!! 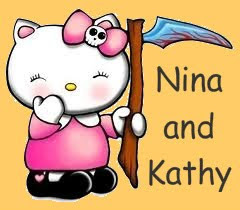 Visit Nina and Katy at their blog Death, Books, and Tea !
Posted by Greta is Erikasbuddy at 12:00 AM