ANd let's all give a nice big ZOMBIE GROAN WELCOME to Adam Gidwitz the author of a most awesome retelling of Hansel and Gretel called "A Tale Dark and Grimm".

THe Zombie Monkeys say Welcome too.....

Are you getting into the Halloween spirit?

Adam: Is this a question for me? Hello? Anyone there? Who's asking this? Where am I? How did I get here? Isn't this an interview with Modern Bride? That's what my agent told me...

GRETA: Darkfallen!! Get your ass out of that dress and quit trying to freak us out with your Bride of Chucky act!!

Darkfallen: No way!! This is awesome!

GRETA: I swear to BOB if you don't get back up those stairs and take that off then I'm going to sick the dogs on you!

Darkfallen: So, what you're trying to tell me is you want me to romp around the house in the buff while we have a famous author in the house.

GRETA: Uggs.... SOrry about her... But SInce we have you here today we thought it would be most awesome to ask you about some spoky scary bedtime story stuff with you.

*darkfallen shuffles over to Adam. Monkey brains in hands*

GRETA: Sorry... she gets excited when we have guests. SOmetimes I have to chain her to the wall just to keep her in line.

OH! YOU'd like that wouldn't you? HAHA!! LAter later my pet!!

Anyways.... As I was saying before we were interrupted I thought today we could rap (cuz I'm cool) about bedtime stories that go BUMP in the night

1) What was your favorite Grimm Fairy tale as a kid?

Wait, are you talking to me again? What is that thing? A monkey? A zombie? Why is it carrying brains? Oh lord, where am I?

I didn't have a favorite Grimm tale--I'M SORRY! DON'T EAT ME!--okay. Just keep that thing away from me...

GRETA: Darkfallen!! Get the hell away from him!!!

I didn't have a favorite Grimm fairy tale because I thought all Grimm fairy tales were lame and boring and sweet and moralistic, and I liked cooler things like Roald Dahl, who sometimes writes scary things--though not nearly as scary as that zombie thing over there...

GRETA: I don't know... Matilda kinda frightened me. I mean... Her dad was Danny Davito!

Darkfallen: And were you paying attention?

GRETA: Oh wait!! What about THE WITCHES?!! THat one was pretty scary!! And the movie was quite awesome!

Darkfallen: Do you only read books with movies made after them?

GRETA: DOn't judge me! I have a short attention span

Darkfallen: I think you have a lack of brain cells.

Anyway, it wasn't until I was an adult that I started to read the real Grimm fairy tales, where kids have their heads cut off by their parents and cut off their own fingers and get cooked in stews and cool stuff like that. Your monkey-zombie would love it.

Darkfallen: What are you talking about? YOu said it too!

Darkfallen: I have no idea what you are talking about.

2) What fairy tale scared you so much you were afraid to go to sleep? I personally was scared to death of the Wicked Witch of the West. EEEK!!

You live with a zombie, and you were scared of the Wicked Witch?

GRETA: IT was a confusing time in my life. I don't like to discuss it ;)

Yes, she was scary, but have you ever read a Grimm story called Fowler's Fowl?

GRETA: No, why should I?

It's about a guy who marries women, butchers them, and hangs them from the ceiling in his basement. Then, when he marries a new girl, he gives her a key and says she can go in any room in the house save the basement. So of course she goes down there as soon as he leaves. She finds the women hanging from the ceiling, and she screams and drops the key, and it lands in a pool of sticky, new blood on he floor. She picks it up and tries to wash it off, but the blood won't come off.
And then the husband comes home, and calls out, "Wife, wife, come to me, and how me now your golden key!" Try sleeping after that one. AH! That thing keeps sneaking up on me! What is wrong with him...her...it?

GRETA: What the hell? THat's a bedtime story? You gotta wonder what the hell those dudes told their kids before they went to bed. I bet they slept with like mutilated puppies and stuff.

No wait!! Darkfallen! THat is not an order to go mutilate puppies. Get out of the neighbor's yard!

Darkfallen: *mutters* SHe never lets me have any fun

3) Why on earth do you think that parents thought it was a cool idea to tell us about giants and trolls that eat little kids then turn out the lights while we panic with night terrors awaiting the sun to rise so the vampire under the bed doesn't chow down on us?

Two reasons: 1) Because parents know that a scared child is a well behaved child. For example, right now I am terrified of your zombie, and am behaving very, very well, wouldn’t you say?

I have another reason for telling these kinds of stories. I call it “turning tears into blood.” You see, if I want to write a story about children whose parents don’t understand them, I can write something boring and hyper-realistic with silent calls for help and long pauses of disappointment. Or I could write about the parents cutting off their kids’ heads. Not only do I find the latter more awesome, so do kids. And kids tend to get what I’m talking about anyway—and understand it more deeply, because it comes through symbols, instead of literally. So I take the kids’ tears (at bad parents, say), and turn them into blood. And kids are happier, and perhaps more enlightened in the process. AH! Will you control that thing? It gives me the creeps!

4) Who do you think would win in a jello wrestling tournament? The Witch who lives in the Candy House or the Blair Witch? My money says the Blair Witch gets scared and doesn't show.

Darkfallen: What are you talking about Greta? THe Blair Witch scares the living crud out of you.

Greta: Oh mighty witch of Blair!!! WE do not mean to disturb you and your freaky tree things Please let us go in peace!

Darkfallen: Oh brother..... So Adam, what is your take on fairy tale jello wrestling?

Adam: Uh... I love it? Though the dragon in my book would destroy either witch. Quite literally destroy.

Thank you so much Adam for stopping by the Wastelands and yapping with us about bedtime scary stuff. You may take one piece of candy before you go.

Greta: Darkfallen, I told you to buy candy

Darkfallen: I thought you were going to do it?

Greta: No, dude! I put it on the grocery list and you said you were going to go do it.

Darkfallen: I never said that!

Greta: Fine! I'll go get some. I'll be right back

Darkfallen: HEHEHE!! I hung some of those wooden Blair Witch things up in the tree in front of the Wastelands' house. DO you think she noticed? 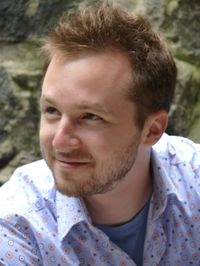 Make sure and visit Adam at his blog: http://www.adamgidwitz.com/
We're pretty sure our zombie monkey and perhaps Darkfallen followed him over there ;) 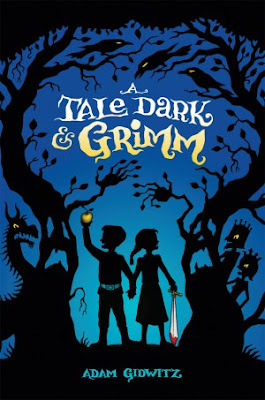 It's a giveaway!! Most famous author Adam Gidwitz is giving Wastelanders a chance to win a signed poster of his book jacket "A Tale Dark and Grim". What a most awesome edition to to spooken up your lovely home ;)

There will be two chances to win!!

Follow the bouncing ball and enter below!! This is open Internationally. Just fill out the Rafflecopter form below and don't forget to leave your mailing address in the form!