Today we have Ambur from Burning.x.Impossibly.x.Bright here to tell us her favorite scary story!

Well, when I was young I watched a lot of scary movies...I watched the Chuckie movies, or as they’re actually called Child’s Play, and the Freddy movies...er, I mean the Nightmare On Elm Street movies all the time. As you can see, I was young enough to watch these movies and give them nicknames, and to this day, I still call them that. I also used to watch Buffy the Vampire Slayer, and I’ll admit, David Boreanaz as Angel was my very first crush...and he still looks good. ;) While I love all those movies and shows, and they definitely gave me nightmares on countless occasions, my favourite scary story as a kid actually came from a book...a library book. 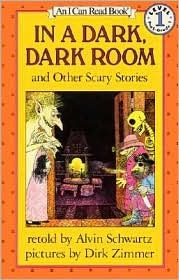 This library book was super popular, and my whole class took it out at least once. I swear, this book was coveted, and when I got my turn, I knew why. It was amazing. It was written rhythmically, there were pictures, and the stories were so creepy...and memorable.

My favourite scary story is from this book, and that book is called: In a Dark, Dark Room and Other Scary Stories. (See even the title sounds awesome!) The story is called “The Green Ribbon.” I’ll summarize it for you:

First, there is a girl with a green ribbon always tied around her neck, and then, there’s a boy. The boy and girl liked each other. He was very curious about the ribbon, and he kept asking her about it. She would never tell him. They grew up, fell in love, were married, and when he asked again, she still wouldn’t tell him. She said he’d have to wait for the right moment to find out about the ribbon. They got older, and the woman got sick. She was dying, and called him into her room. Finally, she told him that he could now know about the ribbon. Then, she asks him to untie it....and her head falls off!

As demented as it sounds, the head falling off part was the best! Haha I even found a youtube video of “The Green Ribbon” being narrated. You can watch it if you like:

So, “The Green Ribbon” wasn’t the scariest story that I’ve ever heard, nor was it the best, but it was my favourite, and it’s one I’ll never forget. That last line solidified it for me: “and Jenny’s head fell off.” Plus, the pictures always stuck out in my mind. Did anyone else read In a Dark, Dark Room and Other Scary Stories when they were younger??

Catch Ambur hanging out at Burning.x.Impossibly.x.Bright
Wanna join the Zompacolypse hop? Want all the Wastelanders to trick or treat at your blog this Halloween? Then why don't you join the most awesome party around?! Details are Here but beware of the zombies!! Remember.... we warned ya -- muhahahahas!
Posted by Greta is Erikasbuddy at 12:00 AM