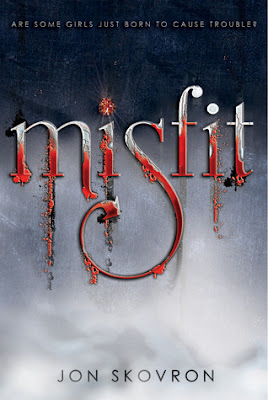 Misfit
By Jon Skovron
Published August 1st by Amulet Books
Pick up your copy at Amazon, B&N, or your local indie today!
Synopsis borrowed from Goodreads:

Jael has always felt like a freak. She’s never kissed a boy, she never knew her mom, and her dad’s always been superstrict—but that’s probably because her mom was a demon, which makes Jael half demon and most definitely not a normal sophomore girl. On her sixteenth birthday, a mysterious present unlocks her family’s dangerous history and Jael’s untapped potential. What was merely an embarrassing secret before becomes a terrifying reality. Jael must learn to master her demon side in order to take on a vindictive Duke of Hell while also dealing with a twisted priest, best-friend drama, and a spacey blond skater boy who may have hidden depths.

Author Jon Skovron takes on the dark side of human nature with his signature funny, heartfelt prose.


Darkfallen's thoughts of squee:
To say that this was a fun ride would be an understatement! So first I want to I want to start with the cover...the cover pulled me in. It mesmerized me, took me by the hand, and demanded I read it.

Which leads me to my second point...I never even read the synopsis for this book. I had NO idea what it was about outside of the fact that it is a paranormal YA. I will say though, even though I ended up loving it, that was probably a mistake. Since I had no idea what it was about I was a little thrown off in the beginning when I was reading all about Christianity, churches, priest's, monks, ect. I was like Oh what did I get myself into? Not that there is anything wrong with any of those things, they just aren't something I like to read about....until now. This isn't at all a super holy cram it down your throat book.

NO this is a what if holy isn't really so "holy", and demons aren't really "bad" book, and I loved it!

Jael is funny, witty, and just upfront most of the time. I loved the thoughts she had. They were very teenage girl ya know, if your were a teenage girl that just so happened to have a demon for a mother and a ex-priest/demon slayer for a father. That's right Jael is a half-breed. And to top that off she goes to Catholic school. Which that in itself is down right hilarious. But don't get the wrong impression, this book is funny at times but WOW at the drama. I swallowed as fast as a could without choking and I desperately want more.

The romance between Jael and our skater boy meets science whizz boy Rob is perfect. I love every part of it. I want more. I need more. But the best part is that THAT isn't all this book is about. This isn't that we must conquer the world to be together book where that is the only point to the story. I love the twist on religion. I loved the way Skovron interprets stories and myths in a way that I have never thought of. On more than one occasion he left me standing there either laughing or saying to myself aahhhhh that makes sense! Why didn't I ever think of this? Yes I know that this is just a work of fiction and that the views in this book are not to be taken literally, but still I loved them.

Pick up this book and jump into a world where the good guys aren't always so holy, the demons aren't always bad, Hell isn't a place for the sinners to go but rather a place with lava rivers and weird crab shell kitchens, and Heaven may or may not exist. Oh and one more thing...if you happen to see a smelly fish man, his name is Dagon, tell him I said HI!
See ya in hell...