A sleepover at the Wastelands 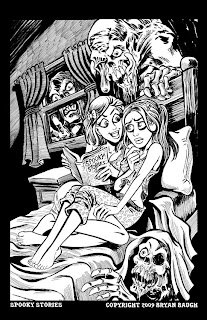 Hello fellow Zompacolypse followers!! And Greetings from the morgue!!

Remember back in the day when you would have a slumber party, make a fort out of sheets, grab a flash light (with nearly dead batteries, of course), and tell ghost stories all night until you were too scared to go to sleep?

And tonight we are going to do just that!

So grab your PJs, go get you a flashlight, and meet us at the Wastelands right when the moon is rising. Cuz tonight we're gonna get our ghost on! 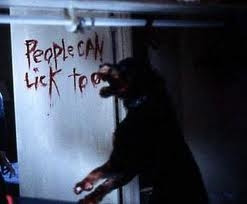 "Humans can lick too!"

A nine-year-old girl took her faithful dog to her room one evening when her parents tucked her into bed before they left, telling her they'd be back late and that as long as the dog was with her, she'd be safe. So she settled under her covers as they left and drifted off.

Later she woke to a peculiar sound: dripping in the bathroom. Drip...drip...drip...She figured the faucet was leaking and reached down by her bed. After a moment she felt her trusty canine friend lick her hand and knew she was alright. She rolled over and went back to sleep.

Some time later she woke again and heard the rhythmic dripping in the bathroom. She swallowed and reached down for the dog. She wished Daddy would come home and fix it; she hated being alone. But her dog once again licked her hand, and so she settled down to go back to sleep.

The third time she woke, she listened for her parents but could hear nothing but the dripping. She realized it was making her uncomfortable and rose to go to the restroom. The dripping got louder and louder with every step. Drip...drip...drip...

She heard something behind her, but assuming it was the dog following her, she went to the bathroom and flipped on the light. Then she saw the shower and screamed. 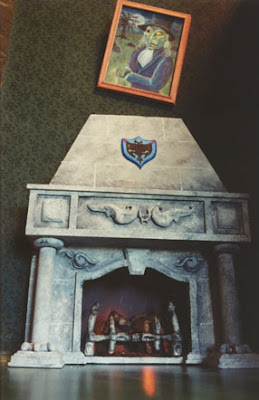 The was a haunted house where supposedly, every night, a bloody head fell down the chimney. At least that’s what people said. So nobody would stay there overnight. Then, a rich man offered two hundred dollars to whoever would do it. And a boy said he would try if he could have his dog with him. So it was all settled. The very next night the boy went to the house with his dog. To make it more cheerful, he started a fire in the fireplace. Then he sat in front of the fire and waited, and his dog waited with him.
For a while nothing happened. But a little after midnight he heard someone singing softly off in the woods. The singing sounded something like this: “Me tie dough-ty walker…” “It’s just somebody singing,” the boy told himself, but he was frightened. Then his dog answered the song! Softly and sadly, it sang: “Lynchee kinchy, colly molly, dingo dingo….” The boy could not believe his ears, His dog had never uttered a word before. 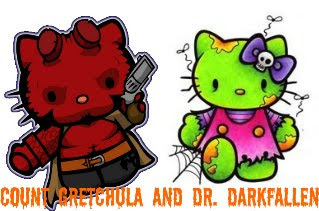 Remember... there's nothing to be frightened of.... or is there?

Email ThisBlogThis!Share to TwitterShare to FacebookShare to Pinterest
Labels: Humans can lick too, Me tie doughty walker, scary stories, Zompacolypse 2011