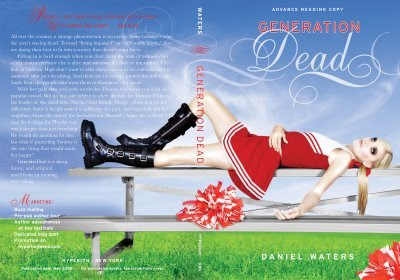 Generation Dead
By Daniel Waters
Published May 6th 2008 by Hyperion
Pick up your copy today at Amazon, B&N, or your local indie!


All over the country, a strange phenomenon is occurring. Some teenagers who die aren't staying dead. But when they come back to life, they are no longer the same. Feared and misunderstood, they are doing their best to blend into a society that doesn’t want them.
The administration at Oakvale High attempts to be more welcoming of the “differently biotic." But the students don’t want to take classes or eat in the cafeteria next to someone who isn’t breathing. And there are no laws that exist to protect the “living impaired” from the people who want them to disappear—for good.
When Phoebe falls for Tommy Williams, the leader of the dead kids, no one can believe it; not her best friend, Margi, and especially not her neighbor, Adam, the star of the football team. Adam has feelings for Phoebe that run much deeper than just friendship; he would do anything for her. But what if protecting Tommy is the one thing that would make her happy?

Darkfallen's thoughts:
Something strange is happening. It seems some teens live, some die, and some well lets just say they died....once Not all of them are staying dead anymore. No one really knows why this is happening, or why it only seems to be happening in the U.S.for that matter, but one thing is for sure it brings a whole new term to the meaning of hate.

Phoebe is you typical high school goth girl. Bonded to her 2 best friends Margi and Collette. The Weird Sisters has they like to refer to themselves. But all that has changed since Collette died. Only she didn't stay dead. She came back, as did alot of kids. But none of them are the same. As Phoebe and the rest of the kids at Oakville High try to adjust to their new undead classmates, she finds herself interested in Tommy Williams. That would be fine but you see Tommy died over a year ago. Not to mention the fact that Phoebe's friend, Adam, has realized her has feelings for her. Feelings she doesn't seem to know about.

Since the living impaired died so did all their constitutional rights. There is no laws to protect them. Some people have even gone as far as hunting them done and killing them and getting away with it. In a world with so much fear and hate, and no consequences, there is no limit to the cruelty. And when that takes over mistakes are made and the stakes are high. Someone will pay the price, but who?

My thoughts:
This is the first zombie related book I've read and I have to say that I am glad this was my first. I wasn't sure how I was going to feel for this book or is I was even going to feel anything at all. Let me tell you I DID and it was great! The writing was good and it was a fast enjoyable read. I found myself getting wrapped up in the characters and while Collette doesn't have much dialogue (bc zombies can't talk that well) I was surprised when she brought me to tears. Daniel Waters has taken Zombies from the scary flesh eating beings and turned them into a thing of twisted beauty. Which we all know is the best kind *winks*. It's just not possible to read this and not feel for them. It takes the term "misfit" and "bully" to a whole new level.

While I didn't give it 5 stars I will say that I almost did and I can't wait to read the next book. The ending was just alittle rough for me. (by ending I literally mean the last 3 pages) It had a twist I didn't see coming but I would have liked to be left hanging alittle more. Like maybe I would have just left the last few pages off. Ya know what I mean? O that's right you don't...so what are you waiting for? Pick it up and find out! You'll be glad you did.

Trust me I wouldn't lie to ya;)

Until my next breath...

Wanna join the Zompacolypse hop? Want all the Wastelanders to trick or treat at your blog this Halloween? Then why don't you join the most awesome party around?! Details are Here but beware of the zombies!! Remember.... we warned ya -- muhahahahas!
Posted by Darkfallen at 2:00 AM