The Fall by Robert Duperre: Review 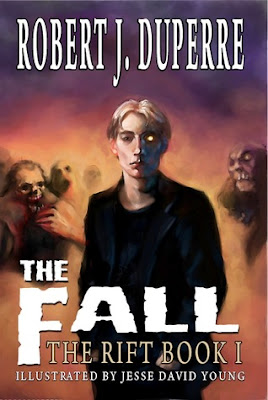 The Fall (Rift #1)
By Robert J. Duperre
Pick up your copy at B&N, Amazon, or your local indie today!

An ancient evil, trapped in the ruins of a lost Mayan temple for centuries, has been unleashed. It takes the form of a deadly virus, one that causes violent insanity in the living and the recently departed to rise and walk. It spreads around the globe, throwing the world into chaos and war.

As it progresses, those in the States who find themselves far away from the epicenter watch it unfold with unbelieving eyes. From Washington D.C. to Dover, New Hampshire, regular people are hurled into an existence outside their control, left to deal with catastrophic situations that they aren't prepared to handle. Life becomes a nightmare, and that nightmare is spreading.

First time author Robert J. Duperre presents this scenario with The Fall: The Rift Book I, the first of a four-part series. In this book, he throws his characters into a gambit; when the alternatives are life or death, self-preservation or the protection of others, what path will they choose? Is there a darkness that resides in everyone, from every walk of life, that is screaming for release? When society falls apart and we are left to our own devices, will we make the right decisions, or let the tide take us where it may? There is horror, there is death, there are the walking dead, and all around are choices.

The novel is illustrated by Jesse David Young, whose drawings capture the intense feel of the events happening within. There are twenty illustrations in all, as well as the cover art he provided. These add to the reading experience and help to throw you, the reader, head-first into the world they have created.


Darkfallen's thoughts:
Something you should probably know about me before we start this review here...My one true phobia in life is of the creepy crawly variety. Creepy crawly things you can see, microscopic creepers you cant...it doesn't matter. They both scare the bajeezus out of me. Like they scare me WAY more than say flesh eating dead guys?!
So what do you think happened when Mr. Duperre here mixed BOTH creepy crawlies (both microscopic and the crunchy kind) with flesh eating, not at all,
'Hi I'm a zombie' 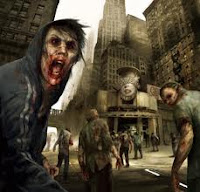 Well I'll tell ya what happened. It lead to a very scared Darkfallen, huddled under her covers, armed with a bottle of germ-ex, a flashlight, and a bookmark.
Don't look at me like that. That bookmark saved my life on more than one occasion. Every time they tried to bite me I thunked them in the head with it and smashed em back in the book.
*winks*
But that's not what your here for right? You wanna know about the book. You want to hear the part where I tell you that even though this book both terrified and thoroughly discussed me, that I couldn't put it down. That I couldn't look away. That I was sucked into this nightmare so deep that I really did wake my husband screaming in the middle of the night.
Well it's true folks...every single part of it.
This book was nothing short of amazing. Robert Duperre has a way with words that sucks you in and makes you feel like you're there. And there is so much more then just horror spilled onto the pages. There is emotion in every form. There is pain, sorrow, lust, and maybe...just maybe a little love in there too. With just the right amount of poetic imagery to really make you feel it and BAM then you've got a book that will leave you begging for more. Not to mention the fact that Robert Duperre's zombies are a completely original take that I haven't seen done before. I mean YES they want to, and WILL eat you. But it's the beginning. The how it all started, that makes this book so unique. And the best part? The suspense. The fact that book 1 comes to an end with a cliff hanger that will lead you to want to strangle him, and a twist towards the end to keep you guessing and saying to yourself ...
Just what ARE these things?!?!
Do yourself a favor. Pick up this book. Hell pick up any of his books...I assure you, you won't be disappointed!