Mmmmm, I had BRAINS for Breakfast...: Guest post by Cassandra from Monkeycstars

Mmmm, I had BRAINS for Breakfast...


Who knew they actually sell BRAINS at the supermarket??? 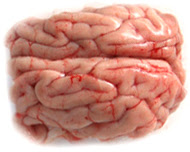 NOT ME! and it's canned...
I knew nothing of this, until a friend (Marsha) told me about it. We had this great talk last night about being cannibals, eating human flesh, brains... As soon as I brought up my desire to try brains, Marsha told me that people actually eat brains and eggs for breakfast! I was on a mission.
I would hunt for BRAINS in the morning! Apparently, you really can buy canned "Pork Brains" at certain stores... I was determined to find it. I had to go to 5 different stores, but I got my brains ☛ @ Food Lion.

This entire crazy discussion stemmed from me reading a creepy, spectacular, AMAZING book called Inside the Outside by Martin Lastrapes. Everyone needs to grab it right now! Inside the Outside is about a girl named Timber who grew up in a cult as a cannibal.
From Goodreads... 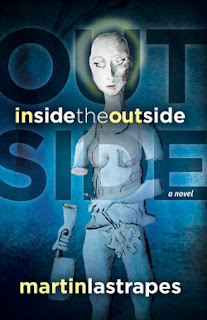 By the time Timber Marlow is fifteen years old, she has already killed three men. Despite the bloody and violent nature of their deaths, Timber is hardly a murderer, at least not in the traditional sense of the word. She has lived her entire life as a cannibal within a cult tucked away in the San Bernardino Mountains called the Divinity of Feminine Reproach. The Divinity keeps itself isolated from the Outside, which is the mainstream society beyond its invisible borders. When the opportunity presents itself, Timber escapes into the Outside, bearing witness to some dark and unsettling truths about the world around her and the integral role she plays in it. But no matter how long she stays away, Timber finds out the past isn't as far away as she thinks it is. In this debut novel, laced with scenes of horrific violence and uplifting humanity, Martin Lastrapes has written a one-of-a-kind story about love, friendship, sacrifice and cannibalism.
✴THE DARE✴
For my review & a peek at the discussion I had with Marsha, click here
and for reviews by others posted on Goodreads, click here.
Buy Inside the Outside by Martin Lastrapes
Amazon paperback and Kindle
B&N paperback and NOOK
Find Martin Lastrapes
website: http://www.martinlastrapes.com
twitter: MartinLastrapes
Goodreads: Author Profile
Since I was just a little girl, I've always wanted to taste the "gray matter". Who gave me this idea? Was it Indiana Jones or was it from hearing my dad talk about the time he had monkey brains while in the Army??? I don't know, but since I'm a ZOMBIE, I should have me some BRAINS! I can officially check that off the list. Now, for the human flesh part, do we have any volunteers?
Watch me prepare and eat my ❤ BRAINS...
Click here - I KIDNAPPED Martin Lastrapes!
☝ WICKED AWESOMENESS ☝

mmmmm BRAAAIIIINNNNSSSS. Does a body good ;-) 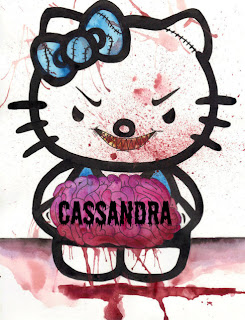 Want more Cassandra? A second helping, perhaps?
We knew you would!
You can catch her on her blog @ Monkeycstars!
Posted by Darkfallen at 2:00 AM