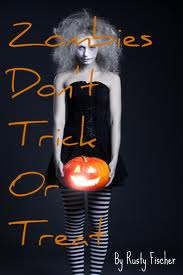 The zombies were out
For a fun, festive night;
They were goblins and ghouls
And witches in sight.
Over there was a demon
His legs warm as toast;
Down that street’s a pumpkin
Down that one’s a ghost.
No, it wasn’t Armageddon
Or a monster’s pot luck;
It was the one mortal night
That didn’t quite… suck!
That’s right, little ghosties
It was… Halloween;
The creepiest, crawliest
Living dead scene!
Poor Chester was frightened
He was new to this town;
And ever since dying
Poor Chester’d been down.
He wasn’t quite used
To being undead;
If he had his way
He’d be living… instead.
His friends liked being zombies
They found it quite cool;
But all Chester felt
Was like one giant fool!
He hated his hairdo
He hated his skin;
He hated the fact
That he could no longer grin.
His legs they were stiff
His arms were quite chilly;
And stumbling around
Just made Chester feel… silly.
Tonight might be different
Poor Chester agreed;
As he watched other kids
Look as foolish as he.
For each one looked goofy
For each one looked grim;
For each one looked not
Quite much better than… him!
“But where are they going?
He asked of a bud;
Who looked at him like
He had the IQ of a spud.
“They’re all trick or treating,”
Was the answer he gave;
“Or have you forgotten,
Since you rose from the grave?”
“I seem to recall,”
Little Chester did say;
“Of begging for candy
On Halloween day.”
“Let’s give it a try,”
His buddy made it sound like a synch;
“Chocolate’s not as good as brains
But it’ll do in a pinch.”
Chester shrugged
And followed his friend;
As they shuffled and groaned
Up the long driveway’s end.
The lawn was festooned
With orange and black;
The setting quite ripe
For a zombie attack!
The young man who stood
At his cozy front door;
Thought the zombies on his porch
Wore costumes; nothing more.
He smiled,
They shuffled;
He sniffed
And he snuffled.
“I quite love your costumes,”
He said with a smile.
“But your breath I smelled coming
For more than a mile!”
When the man tried to offer
A bowl full of candy;
All Chester could smell
Was his brain oh-so-dandy.
He reached for the bowl
But dropped it instead;
And as the man bent to catch it
Clamped onto his head.
“But why?” asked the man
Squealing in pain;
“Why bother with candy,” Chester said
“When my treat is… your brain!”
OKAY....THAT was mondo awesome....you can't say it wasn't! And look at the scary dude who wrote it... 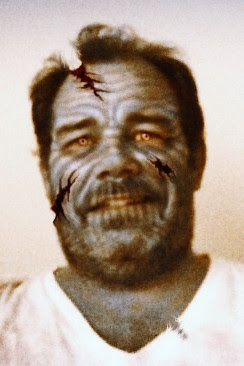 EEEeeeekkkk!!!
Imagine waking up to find that in your email? lolz
Visit his blog, www.zombiesdontblog.blogspot.com, for news, reviews, cover leaks, writing and publishing advice, book excerpts and more!

***Wasn't that great? And spooky ooky?!! I mean EEK EEK EEK!!! ~~ Rusty has been kind enough to offer a giveaway exclusively to Parnanormal Wastelands of his awesome zombie book, "Zombies Don't Cry" !! And we can't be more excited!! 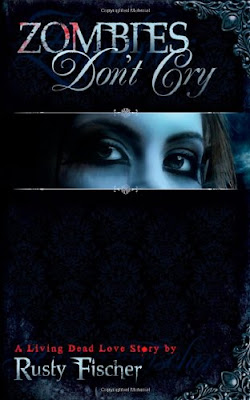 In the sleepy small town of Barracuda Bay, Maddy Swift leads the life of a fairly typical teenager, but while attending a party one night, Maddy is struck by lightning and awakens to realize she has been reanimated and turned into a zombie. While becoming acquainted with her new "lifestyle," Maddy stumbles upon two unexpected undead chaperones, fellow students Dane and Chloe, who begin to teach her the ways of zombie life, including defending the populace from Zerkers—the bad zombies. Together, on prom night, the three teens must ultimately defend Barracuda Bay High from an all-out zombie Armageddon.

To get your sticky corpsy hands on this paperback then follow the bouncing ball and sign up! This contest is intertantional. Good luck guys and ghouls!!
And remember to leave you mailing address in the Rafflecopter form below so we can ship it off asap if you win!
Also this contest it open to Paranormal Wastelands followers only. So if your not already...join us! We promise not to bite...hard;-)