The Shining by Stephen King: Reviewed by Audrey 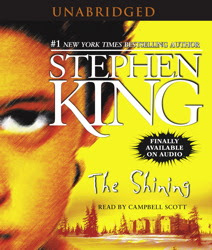 The Shining
BY Stephen King
Published August 15th 2005 by Simon & Schuster Audion
Pick up your copy at Amazon, B&N, or your local indie today!
Synopsis borrowed from Goodreads:

First published in 1977, The Shining quickly became a benchmark in the literary career of Stephen King. This tale of a troubled man hired to care for a remote mountain resort over the winter, his loyal wife, and their uniquely gifted son slowly but steadily unfolds as secrets from the Overlook Hotel's past are revealed, and the hotel itself attempts to laim the very souls of the Torrence family. Adapted into a cinematic masterpiece of horror by legendary Stanley Kubrick -- featuring an unforgettable performance by a demonic Jack Nicholson --The Shining stands as a cultural icon of modern horror, a searing study of a family torn apart, and a nightmarish glimpse into the dark recesses of human weakness and dementia.

By Audrey from Bibliosaurus Text

Okay, you kind of need to be living under a rock to not have heard of Stephen King’s The Shining. And there was a super scary movie made of it by Stanley Kubrick. Plus, who doesn’t know that “all work and no play makes Jack a dull boy”? The Shining was originally written in 1977, so how could we not all know how it goes? Well, I had never read the book, and although I’ve seen the movie a dozen times or more, I have realized that I didn’t really know The Shining after all.

I picked up the audiobook after my mom kept insisting I read it. She absolutely loved the book, and told me over and over again that it was so scary she couldn’t sleep. I didn’t have that problem, personally, but I did start thinking I was seeing stuff out of the corner of my eye while thinking about the story. Showers were definitely more interesting, thinking I was seeing a person–maybe with a roque mallet?–outside the shower curtain.

Jack’s alcoholism is really put on display in the book. We get an insider’s look at what it’s like to be a recovering alcoholic. He’s been sober for two years since alcohol helped to ruin his life, yet Jack still yearns for a drink every single day. We learn much more of his and Wendy’s back stories, and the family histories that lead to their dysfunctions. King’s insights into the human condition are often striking, and I don’t think his critics give him enough credit where that is concerned.

As for the audiobook, Campbell Scott does a great job narrating. He doesn’t try to copy Jack Nicholson’s performance as Jack, even though that seems like it would be really easy to do. Instead, he treats each character as the person they are in the book, rather than in the movie, and does justice to King’s prose.

The bottom line is this: if you have seen the movie and liked it, but haven’t read the book, you should read the book. The book and the movie are VERY different, and you will not know how the book ends. Danny is a different character, as is Jack, and the hotel is much more of an actual character in the book. What’s better? It’s a toss up. As lame as it sounds, the book is very effective as a book, and the movie is effective as a movie, and they should be judged separately because they’re so different from each other. But really, read the book. 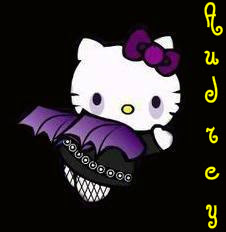 Catch Audrey over on her blog @ Bibliosaurus Text!﻿