Through Her Eyes by Jennifer Archer: Reviewed by LC 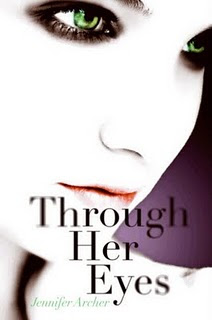 Through Her Eyes
By Jennifer Archer
Published April 5th by Harper Teen
Pick up your copy today at B&N, Amazon, or your local indie!

Synopsis borrowed from Goodreads:
Every ghost has a story to tell.
The last place Tansy Piper wants to be is stuck in Cedar Canyon, Texas, in the middle of nowhere, with a bunch of small-town kids. But when her mother decides to move to the desolate West Texas town, Tansy has no choice but to go along. Once there, Tansy is immediately drawn to the turret of their rickety old house, a place she soon learns has a disturbing history. But it's the strange artifacts she finds in the cellar—a pocket watch, a journal of poetry, and a tiny crystal—that have the most chilling impact on her.

Tansy soon finds that through the lens of her camera, she can become part of a surreal black-and-white world where her life is intertwined with that of mysterious, troubled Henry, who lived in the same house and died decades earlier. It seems their lives are linked by fate and the artifacts she found, but as Tansy begins spending more and more time in the past, her present world starts to fade away. Tansy must untangle herself from Henry's dangerous reality—before she loses touch with her own life forever.

By LC from LC's Adventure's in Libraryland
LC's Take:
Have you ever read a book that catches you totally by surprise? You're just working your way through your TBR list, and happen upon a book that doesn't particularly stand out to you, and then by page 2, BAM! You're completely, irreversibly HOOKED. You can't stop reading, the characters are jumping off the page, the scenes are so vivid you feel like you're right there, and the story is so incredibly addicting, you can't stop thinking about it. Yeah, that pretty much describes my experience with this book.

I picked up Through Her Eyes without any preconceived ideas-- yes, the cover is pretty awesome, the story sounded pretty good-- but it's not like I was super-excited about it or anything. But then I started reading. From the first couple pages, I knew this was going to be a really, really good book.

Tansy Piper has just moved to Cedar Canyon, a small West Texan town in the middle of nowhere, with her mom and grandpa. The house they move into is very big and very old-- and it also happens to have a very disturbing past. Long ago, a boy named Henry lived there. One night, Henry jumped off the bridge into the canyon, and now it is rumored that his ghost still haunts the old house. Soon after moving in, Tansy discovers a journal that once belonged to Henry, along with a crystal pendent, and a pocket watch. For some reason, Tansy feels inexplicably drawn to Henry's past, and soon she finds herself becoming more and more wrapped up in his dark and troubled world. Is she going crazy? Or is she really being haunted? The only way she'll be able to find help is by finally letting her guard down and learning to trust other people.

I loved the characters in this book, because the author gives them history, motives, and depth. Tansy Piper, for me, was a wonderfully flawed character, and I really felt for her throughout the story. I got to know her past, her pain, her fears, her passions, and her hopes. Tansy has been on the move her entire life, going from one city or town to the next-- she's known what it feels like to be an outcast and what it feels like to be betrayed by someone she thought was a friend. The emotions and thoughts that run through her head and the inner struggles she has felt very real to me, and I was definitely able to connect with her.

And then there was Papa Dan. Papa Dan was hands-down one of my favorite secondary characters ever. Over eighty years old and suffering from dementia, Papa Dan barely ever says a word, and yet JA creates a tragicomic character who you can't help but love like your own grandpa. Throughout the book, I laughed and cried, as Tansy learned to appreciate all the memories she had with Papa Dan, while learning that she has to let go of him eventually.

The mood set in this story was eerie, yet irresistibly alluring. The small town of Cedar Canyon completely draws you in until you feel like you're actually there, and really can see through Tansy's eyes. The story itself moves along at a bit of a slower pace than others I've read-- there's a good amount of internal dialogue as Tansy struggles with what's going on-- but I didn't mind because I was so thoroughly invested in the main characters. Also, I had to see how everything ended!

I could probably say a million different things about this book, about how I couldn't put it down (I couldn't), about how brilliant the writing was, about how easy it was to understand and follow the characters because we know their history, but I feel like that still wouldn't be doing it justice. I will just end this review by saying, give this one a chance, because it completely threw me off guard and exceeded my expectations. Beautiful, mysterious and haunting, Through Her Eyes was one amazing book. 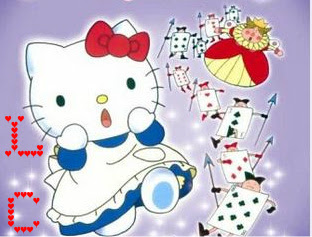 You can find LC on her blog @ LC's Adventures in Libraryland
Posted by Darkfallen at 4:00 AM