Thank you so much to Darkfallen and Greta for the opportunity to be a guest blogger during their Zompacolypse 2011! What a great event and to tell you the truth, this is my first time being a guest blogger and I’m a little nervous. But I shouldn’t be, after all, Halloween is my time to shine. I mean, not only do I write horror books, but I was the kid who liked coming to grade school dressed up as a flesh-eating zombie paperboy with a bag full of bundled brains. And that was on St. Patrick’s Day.

I went on to become the guy in college who used to ride his mountain bike into Oakland Cemetery in Iowa City to visit the eight foot tall Black Angel. At night. Alone. With only a Leatherman for protection. No joke. And let’s be honest, going into any cemetery at night by yourself will make ya pretty paranoid, let alone when the Black Angel is looming on a nearby hillside. 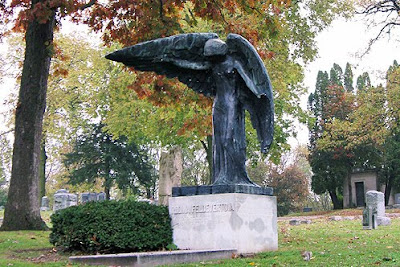 You see, local lore has it that Teresa Feldevert’s eighteen year-old son, Eddie, died of meningitis in 1891 and was buried beneath a tree stump-shaped monument in Oakland Cemetery. When her husband, Nicholas, died a few years later he was buried next to Eddie beneath a huge bronze angel statue Teresa had made by a sculptor in Chicago. Now, here’s where it gets tricky… When Teresa died in 1924, she was placed next to her husband, under the protective wings of the shiny bronze sculpture. But soon after her remains hit the dirt, the angel turned black. Legend has it, that Teresa killed her son after catching him with one of her friends, and it is her evil that caused the change in color, which serves as a warning for people to stay away from her grave.

When you Google it, you’ll see that is said if you touch or kiss the Black Angel on Halloween night, you will be struck dead…unless you are a virgin. And I am proud to tell you today, that I have indeed touched the Black Angel on Halloween night and survived. And to this day, no one believes me…that I wasn’t a virgin. And I’m like “come on, man, it was college! I wasn’t a virgin. Don’t be ridiculous!” And they’re all like, “Uh-huh, riiiiiiight…”

Darkfallen: I believe ya Sean...I mean male virgins in college? Ummmm now THAT would be hard to believe. Lolz *waggles eyebrows*

And that, my friend, is the curse that grows a little darker each and every Halloween since. But now that I’ve had a real life girlfriend for over six years, I plan on returning to Oakland Cemetery this Halloween and, once and for all, proving my power over this silly superstition by touching the angel’s cold darkness once again. So if I’m still blogging in November, you will know that I have some serious Jedi powers, which I promise only to use for evil. And if I’m not still blogging come this November…you will know that I should have never started dating my girlfriend. 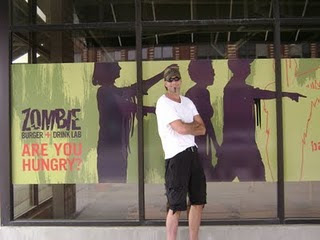 Thanks for hanging out with us! And we REALLY hope your still alive come November. Do you need us to come hold your hand on Halloween? Because we can probably arrange that. Better yet we will even kiss the angel with you. Then we will see...will she kill us all? LOLz For more zombie action you can visit Sean at his blog: http://www.fishblogwash.blogspot.com/ He's just DYING to meet you ;) muhahahahahs! 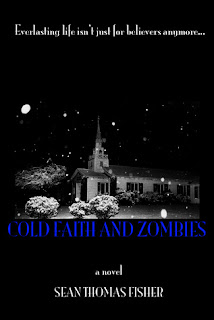 The scripture warns that in &;the last days; & the love of the great body of believers will grow cold and maybe that's why people who aren't people anymore began pounding on Paul's front door. With his zombie movie and gaming experience, his wife, Sophia, and trusty friend, Dan, know they have an edge against extinction. Paul quickly gets them guns, a siphon-kit and a plan to head south, because if the walking stiffs don't get them, the freezing Iowa temps will.

Overnight, Paul goes from the unemployment line to the front line in a battle against evil, where he finally finds his calling as a leader. However, his swelling confidence quickly propels them towards tragedy, putting his faith to the ultimate test while the fate of others hangs in the balance.

This contest is international!! Just follow the bouncing ball and sign up below!!
And by bouning ball we mean fill out the Rafflecopter below. Be sure to leave you email address so we can email you the book. Also this giveaway is open to follows only so if your not already lost in the wastelands, join us!
We don't bite...much! lolz