Bat Wings and a Movie with Robert Duperre: Giveaway

Greta and Darkfallen: Hello ROb!! And welcome to the Wastelands!!

Rob: Hey guys! Thanks for having me! Why's this place so dark, though?
Greta: Never mind that. It is most awesome of you to join us on movie night!! Darkfallen!! Prepare the bat cookies!!! OUr guest has arrived!! Chop chop!! I hope you like bat cookies. We were totally out of Puppy Dog tail popcorn so we had to improvise.

Darkfallen: What am I, your slave or something?

Greta: Uhhh yeah! It's your turn remember!! Now bring us the platter of bat cookies!

Rob: Sounds tasty! Oh, and DF, could you get me a beer or something?

Darkfallen: Sure. That's the last time I sign something without reading it. Rob, word to the wise. Don't sign anything Greta gives you without a lawyer.... she already owns half of my soul.

Rob: Wait a minute...why did she tell me I had to sign a waver before I came in? Does that mean...

Greta: Anyway, tonight we are going to be watching one of my favoite scary movies.... PET SEMETARY!!! YES!!

Darkfallen: That's not what I rented

Greta: NO! I will not watch Constantine again, damn it!! YOU made me watch that last week! WE're watching Pet Semetary.

*Darkfallen wrestles Greta to the ground and stuffs bat cookie into her mouth.*

Darkfallen: As Greta was saying... tonight we will be watching Constantine. THe most awesome scary movie ever.

Greta: WHat? DUde! Matrix Boy doesn't hold a candle to Church the Cat.

Rob: I'm with Greta on this one. That movie kinda blows.

Darkfallen: Are you forgetting that Gavin is in this movie?

Darkfallen: Coolness!! So, Rob, pull up a chair...

Darkfallen: NO! HE can sit by me!

*both pat cushion in between the 'we're pretty sure they had their shots' girls*
Greta: SO, Rob, before we start our man fest horror movie.... which we're sure you're excited about .... we were curious ---


What was your favorite scary movie as a kid?

I loved loved LOVED the Twilight Zone movie. You know, the one where Dan Ackroyd turns into a scary demon thingy in the last vignette and the gremlin on the plane? Yeah, that one. Well, I would sit there in the living room with my hands over my face, peeking between my fingers, trying to be brave enough to watch. All the while this was happening, mind you, my younger sister was beside me, poking fun at me for being such a coward. She was five at the time. Little meanie.

What scary movie scared you so much you were afraid to go to sleep?

It's an oldie, but Videodrome, this older flick with James Woods, scared the living hell out of me. It haunted my nightmares for weeks afterward. Really gross, too, which affects me even more than being scary sometimes.

What scary movie franchise (example: Nightmare on Elm Street) do you get uber excited about when a new one is about to come out?

Hm. Not really sure. I used to get all excited for Friday the 13th movies, because a friend and I had a little thing going where we'd break down cliches, body count, and method of killing, but that hasn't happened in a REALLY long time. So now, I'd have to say...probably none of them. Can't stand "Saw" after the first one. Hostel...same thing. However, there IS a new "THING" coming out...a prequel to John Carpenter's 1981 classic! And I"m SUPER FREAKING PUMPED about that!

How do you feel about modern horror movies?

Really, it's the same that they've always been. Some are good, most aren't. For example, "The Descent" is on my list of top-ten horror films of ALL TIME, and that just came out a few years ago. Also, I really, really want to see Guillermo Del Toro's "Don't Be Afraid of The Dark". So...yeah, horror movies have stayed pretty consistent over the years...at least since the late sixties or so. But really, even the bad ones I love. There's just something about the genre that just draws me in. Maybe it has something to do with the fact I was so frightened by them so long ago and was made fun of for it...

*both girls waggle eyebrows and giggle* 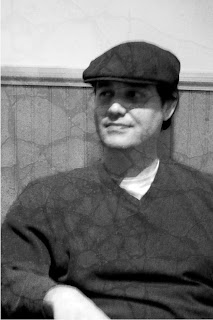 You can find out more about Robert and his books at his website: http://www.theriftonline.com/

Robert Duperee is offering Wastelanders an opportunity to win a set of his spooky books.
That's right, kids!! All four of his fabulous books!
We are talking a copy of Silas, The Fall, Dead of Winter, and The Gate !!
AND!! It's open to US and CANADA Wastelanders!!
Lemme here a whoop whoop!!
Enter below and keep your skeleton fingers crossed! YOu might just get lucky ;)
What do you have to do to get your hands on this stack of awesome? Well that's easy!
1.) This is open to Google Friend Connect followers! So if your not lost in the wastelands somewhere then...join us!
2.) This contest is open to the US & Canada.
3.) Fill out the Rafflecopter form below! Easy Peasy:)
(Please remember to leave your mailing address in the form so we can mail it to you if you win!)


Posted by Greta is Erikasbuddy at 4:00 AM