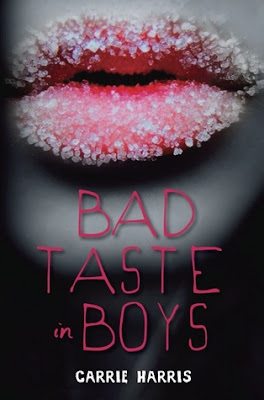 Kate Grable is horrified to find out that the football coach has given the team steroids. Worse yet, the steroids are having an unexpected effect, turning hot gridiron hunks into mindless flesh-eating zombies. No one is safe--not her cute crush Aaron, not her dorky brother, Jonah . . . not even Kate!


She's got to find an antidote--before her entire high school ends up eating each other. So Kate, her best girlfriend, Rocky, and Aaron stage a frantic battle to save their town. . . and stay hormonally human.


Darkfallen's thoughts:
Kate is your average geek girl high school student. She gets ignored by most people. Those that don't ignore her pick on her. But she is also the student sports medicine assistant for their losing football team, which means whenever there is a medical emergency suddenly everyone remembers her name and comes calling.

That's how it started. She arrives at a party she didn't want to go to in time for Mike, the grubby handsy football jock, to puke black stuff on her car, grab her butt and walk away. Only a few minutes later is when Aaron, high school quarter back & Kate's dream boy, grabs her hand takes off running. Apparently there is some sort of emergency with Mike the groper, and it's bad...like OMG THAT DUDE IS DEAD STIFF, bad. So why is it that all Kate is thinking, Ummmm like Aaron is totally touching me!!!?
This book was hilarious most of the time. I mean yes there was a few parts where I was like Really?!, but I have to tell you as a general rule this girl *points to self* has an issue with "stupid" funny. Like the movie Anchorman for instance? Yea I fell asleep in the theatre during that. However the second time I watched it at home I was laughing, and by the third time I was quoting it....so ya see it takes me a minute to warm up to it. This book was no exception. In the beginning I was that girl that fell asleep in the theatre, and by the end I am the girl whose laughing out loud and her mother-n-law is giving her weird looks! lolz

If you enjoy a good comedy then this book is for you. Pick it up and breeze through it. It is a fun light read that I would say kind of reminds me of Shaun of the Dead meets YA teens. It will leave you thinking things like...Ewwww so that's what it taste like to kiss a zombie.