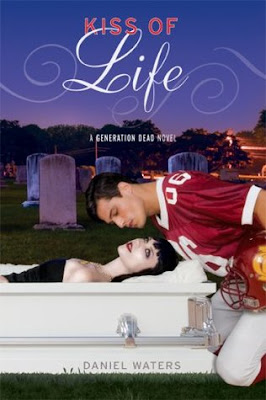 Kiss of Life (Generation Dead #2)
By Daniel Waters
Published May 12th 2009 by Hyperion
Pick up your copy at B&N, Amazon, or your local indie today!

The phenomenon that’s been sweeping the country seems to be here to stay. Not only are the teenagers who have come back from their graves still here, but newlydeads are being unearthed all the time. While scientists look for answers and politicians take their stands, the undead population of Oakville have banded together in a group they’re calling the Sons of Romero, hoping to find solidarity in segregation.


Phoebe Kendall may be alive, but she feels just as lost and alone as her dead friends. Just when she reconciled herself to having feelings for a zombie — her Homecoming date Tommy Williams — her friend Adam is murdered taking a bullet that was meant for her. Things get even more confusing when Adam comes back from the grave. Now she has romantic interest in two dead boys; one who saved her life, and one she can't seem to live without.


Darkfallen's thoughts of zombie SQUEE:
Oh the land of the not-so-dead, how I have come to heart you so....

This is one of those series where the 2nd book is actually better than the first. Whereas the second book in most series is what I call a "bridger" this was not. It was SOOOOOOO much more than I thought it was going to be.

In fact this series has completely suprised me in the most fantastic way. I picked Generation Dead up in the clearance section at my local book store for 1 reason, the cover was ironic and cool. I didn't expect much out of it however. Just a little light reading to break up the heart renching series that I've been reading. Boy I couldn't have been more wrong. Daniel Waters has not only introduce my into the world of zombies, he has left my in love with them.

Phoebe is lost as usual in this book. Not knowing which way to go or what she is supposed to do. But who can blame her? Poor Phoebe almost dies because of her living impaired boyfriend Tommy, but instead Adam steps up to the plate and saves the day. The price Adam payed was his life....well his "living" one that his. Since Adam has come back Phoebe is trying to help him find is way all the way "back". He like so many living impared kids has trouble talking, walking, and just about everything else we "living" people take for granted. She doesn't know how to juggle both Tommy and Adam so she pushes Tommy away.

I loved how the point of views switched back and forth giving us an inside look into Adam. Seeing inside Adam's head, hearing the world as he perceives it, well it broke my heart. I spent the majority of this book feeling like I couldn't breath, especially when reading Adam's thoughts. It literally felt like someone had put my heart in a vice. With every thought he had for Phoebe the vice squeezed tighter.

This isn't just your typical love story. There is alot of twists and turns and I still HATE Pete. I locked him in a cage and threw away the key in the first book and I assure you that I set his cage on fire during this one, but he wasn't the only one in that cage if you know what I'm saying;)

Now that you have heard what I had to say I will leave you with this....

Buy it, borrow it, rent it, steal it if you have too, but you need to READ this book!!!
But if you are one of our "differently biotic" friends maybe have a breather steal it for you...since you can't outrun the cops!
*winks*

Until my next breath...