Paranormal Wastelands sits down with the cast form Misfit!

Darkfallen: Really? You had to butt in? You just couldn’t roll with it? *sighs*

Anyways back to the introductions. Today we are very VERY pleased to be sitting here with author Jon Skovron of Misfit, and a few demons….oh and an ex-priest/demon slayer ;)

Paul gives a slight glare and then goes back to staring out the window.

Darkfallen: Sorry you’ll have to forgive Paul, he isn’t really the social type. But he also wouldn’t let Jael sit down with us, complete strangers that are possible possessed, without him so please pay him no mind.

Dagon: Hmm. Can’t argue with that.

Darkfallen: So Jon I have to say that I was a little leery when I first opened this book. I didn’t read the synopsis ahead of time and when I was quickly reading about Christianity and the Bible I thought:

Oh no! What did I get myself into?

But then I started to see your spin on things, and quickly realized this book wasn’t all preachy, in fact it was the opposite. I love how you interpreted common stories in the Bible and your take on what happened to the Pagan Gods. How did you come up with this? Oh and should probably tell you that I agree with almost ALL of your interpretations and have always been fascinated with Paganism.

Greta: All Hail the Ram Man!!

Darkfallen: *shrugs and hangs head as if to say sorry there is no explanation for her*

Jon: Ah yes, the poor Ram Man. He actually illustrates the whole idea really well. Once upon a time he was probably some great and powerful fertility god, and now he’s reduced to reading stories to people who are perfectly capable of reading their own stories. Tragic, really. But that’s the point. It was Dagon’s story, which I stumbled across accidentally while researching something else, that gave me the idea. Here was this extremely powerful god of the Philistines in the Old Testament. Powerful enough to steal the Ark of the Covenant from the Hebrews, anyway.

Paul: Although that didn’t really work out very well for you in the end, did it, Dagon?

Jon: Well, sure, it went south on him eventually. But the point is, he was presiding over a culture that was, at the time, a lot more advanced artistically, technologically, and socially, than the Hebrews. He and his people were big stuff. But then fast forward a couple thousand years and you have this same name, Dagon, popping up again in Medieval and Renaissance theological texts. But now he shows up with just one line in a list of demons of Hell as “Dagon, baker of Hell”. And I just thought, “Whoa, what if that were literally true? What a demotion!”

Dagon: Tell me about it.

Darkfallen: Ok this next question is for Dagon. I know that you once where this super-HOT piece of God meat but now you’re kind of smelling up the place. What’s it like to be a smelly fish demon? I mean what about the ladies? Any smelly fish women running around?

Dagon: Hey, no, I get it. Look, the irony of me being trapped as stinky monstrous fish who works as a baker is the kind of thing only a guy like Belial could think up. It’s a long story that’s pretty depressing so I wont’ go into it. But you know, after a few centuries of being like this, you get used to it. Eventually you even learn to enjoy it. And I’ll have you know, there are some ladies who live along the Lake of Fire that enjoy my natural aroma.

Greta: Hey is this your cousin? 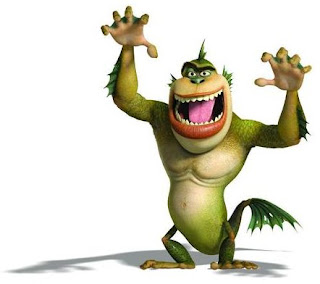 Darkfallen: GRETA!!!! Sorry Dagon she gets like this when we have company. I’ve had to resort to gagging her before. If she gets to offensive just say the word.


Dagon: Are you kiddin’? That guy’s way out of shape. He should be ashamed of himself. I bet he couldn’t even swim a mile. And holes in his fins? Jeeze…This is what I’m talking about, ladies. No matter what you look or smell like, you have to treat yourself with respect.

Darkfallen: Ok let’s move on to Rob so Greta stops staring at Dagon.

*Dagon winks at Greta and blows a kiss at her*

So Rob it was pretty obvious that you always had a thing for our Jael here.

*Jael clears her throat and picks invisible lint from her jeans*

So tell us what was it like that first day when Jael’s demon mojo rendered you speechless? You know she actually thought you were mad at her!

Rob: Ha, yeah. That was really uncomfortable. All kinds of weird stuff was going through my head but I couldn’t help it. Like CRAZY stuff. Honestly, I was starting to think I was losing my mind or something.

Darkfallen: Now that you two have been together for a while, tell me, what is it like having a halfbreed girlfriend?

Rob: I’m not going to lie. It’s pretty awesome. I mean, there’s the little things, like imagine any food or drink you have, instantly as hot or cold as you want it. That right there is great. Or air temperature? Same thing. And then sometimes, when it’s just the two of us, we do this thing where we—OUCH! Aaaand…now I’m getting kicked for over-sharing. Super demon strength bruising my shin…Anyway, what I was eventually going to say is that Jael just wants to be like a regular girl right now and I’m totally cool with that. So mostly we just do normal people stuff. Really, we do.

Darkfallen: Sorry to embarrass you Jael…but since the damage is already done how about you tell us what it’s like. I mean being the daughter of a priest/turned demon hunter, while being a demon, ALL while going to Catholic school? That’s got to be rough.

Jael: It gets pretty crazy. I try to maintain a normal life. But sometimes…it’s just not possible, I guess. You know what, though. No matter how crazy it gets, no matter how bad it sometimes gets. It’s still better than it used to be, back when I didn’t know who or what I was. When I thought there was just something really wrong with me. That was the worst. When I just felt so totally alone and empty and I didn’t even know why. I’ll take some demon mayhem over that feeling any day.

Greta: Jael you rock! I mean you totally kicked demon butt, and you scored yourself this HAWT skater boy….I want to be you when I grow up.

Darkfallen: Hey NEWS FLASH: Greta you are grown up…well you should be anyways. And stop looking at him like that! He is barely older than your son for Christ’s sake.

Darkfallen: Sorry Paul….Anyways, Jael now that you have been to Hell and know that it’s not all brimstone and eternal fire, what do you think? Is it a place you could see yourself spending so time in? I don’t know like a vacation maybe?

Dagon: Darkfallen you’re always welcome. Just grab a bowl of water, say the word, and I’ll come take you away on a little vacation. *waggles eyebrows*

Dagon: What? She asked me about my love life, then she asks about vacationing in Hell….I took that as an offer. *shrugs*

Jael: Yeah, real classy, Uncle D. Anyway, Darkfallen, I haven’t been back to Hell since Belial forced me to go. But I think about it a lot. Like you said, it’s not all fire and brimstone. I’ve heard some of it is actually really amazing. I’d also like to see Asmodeus again so I could thank him for helping me. And…I don’t know. I can’t help thinking that I’d learn a lot more about what my mom was like if I got to know where she was from better. The problem is just…I’m not too popular in Hell right now.

Darkfallen: Thanks for stopping by! And you are welcome anytime…maybe a BBQ or something? What exactly would I BBQ for you Dagon? WAIT!! Don’t answer that. I’m not sure I want to know the answer ;)

Jon: Thanks so much for having us. This has been a lot of fun. And we didn’t want to come empty handed, so we brought a signed copy of Misfit for you to giveaway.


That is most awesome!! And thank you so much for stopping by the wastelands!
ppppsssstttt....Dagon? I will totally go to Hell with you anytime *winks*

Wanna know what you have to do to get your hands on this SIGNED copy of Misfits?
Well that is easy! All you have to do is fill out the Rafflecopter form below. This contest is open internationally. The only rule is to follow us on Google Friend Connect, so if your not already lost ing the wastelands...join us!
People say were fun;)
(also please don't forget to leave your mailing address in the Rafflecopter form so we can mail it to the winner faster!)