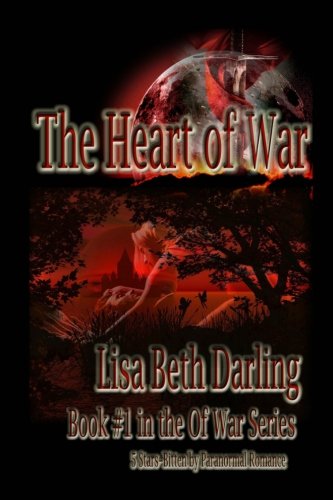 Heart Of War
By Lisa Beth Darling
Published Nov. 21st by Moon Mistress Publishing
Pick up your copy at Amazon today!
Synopsis borrowed from Goodreads:
Inside the Heart of every Warrior breathes the Soul of a Hero--even within The Heart of War.

Meet Ares God of War, the greatest Warrior the world has ever known. He's moody, grumpy, dominant, ravenously sexual, and above all, built like a Greek God.
Suspected of killing his Daughter in-Law, Psyche, and long in exile from Olympus, the solitude of Ares' island is interrupted when Magdalena MacLeod a brash and sometimes manipulative Fey washes up on Ares' island after believing she's been shipwrecked. It's not mere fate that has brought the unlikely couple together yet it may be what tears them apart.

Branded with a golden chastity belt bearing the mark of Cernunnos, Celtic God of the Forest and Death, Alena has been on the run from her husband the Great Horned God for 200 years.

When the Olympians discover her presence on Ares' island, they send Apollo to the island while Ares is away with orders to bring her to Olympus. Diplomatically winding her way out of immediately going to Olympus, when Ares returns and with nowhere to turn, Alena strikes a bargain with the God of War--her virginity for his protection.Ares sees a sweeter deal; her in his bed and himself back in his rightful place on Olympus even if it means turning Alena over to Zeus.
After Alena proves herself to Ares in battle and his bed, the God of War must choose between his Divinely Dysfunctional Family, his pride, and Alena. Get lost in this sweeping dark saga battling Ancient Gods while falling in love with Ares God of War and Alena MacLeod. Ares and Alena share a love that will rock the world from the heights of Olympus to the Celtic moors, but will it be enough? Will love triumph, or will revenge and rage win the battle for the Heart of War?


Darkfallen's thoughts:
Wow that was one hell of a ride. Or more like a journey to the end of the earth and back;)

First I want to start by saying that I am going to try and write this review without spoilers...so I apologize a head of time for my annoying vagueness;)

Alena has been on the run her whole life desperately trying to outrun her fate to marry Cerunnous. (A Celtic half man/half beast God) For the last 7 years she has lived in a camp in Africa. In some of the worst, most unimaginable Hell's, but to her it is a small price to pay if it means she is not married to him.

Ares, the God of War, has been living for hundreds of years on his island ever since he was exiled by his father Zeus for killing Eros wife Psych. That's right, Ares was convicted of killing his own sons wife! So Ares has lived a life of war and sex with his 8 women slaves on his island in relative peace until a strange women washes up on his shore.

Where did she come from? Who sent her? Who is she?

These are all question he wants answers to after finding Alena's lifeless body on his beach. The last thing Alena remembers is boarding a boat, and now she is covered in sand in the arms of some strange man that is yelling at her. Soon they will both learn their fates weren't at all what they thought them to be, and maybe it's time to stop running from them.

This book was one editing session away from being Kresley Cole IAD good. There were typo's galore on every page! But in the end you will see that I still gave it 4 stars...because the content was great! I also felt this book should have been split into two books. It was extremely long and at times the length was intimidating. Take me-->a girl that reads on average 5 books a week, sometimes more. This book took me 5 days to finish. For me that is insane! But there are plenty of plot twists and climax points that this could have easily been split into two books.

HEY! Get your mind out of the gutter!!!

And speaking of gutter...I was under the impression that this was labeled an "paranormal erotica", but I feel it is more of a "paranormal romance." Here is why...for one thing there is an actual PLOT here. One that by far out ways the hot sexiness. Also there are a LOT of graphic rape and abuse scenes in this book which can in now way, unless you should be locked in a prison, considered a turn on. With that in mind I would also like to say that this is not for the faint at heart.

Overall I can't wait to read the next book and if you think you can handle the violence I say you should give it a go...you won't be disappointed;)