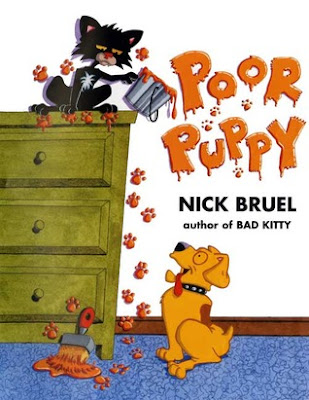 PUPPY GETS HIS OWN BOOK. Kitty's best friend stars in this zany companion to the best selling BAD KITTY. Poor, poor Puppy: Kitty isn't interested in playing, so all puppy's left with are: 1 Airplane, 2 Balls, 3 Cars, 4 Dolls... and 22 other toys. When he's done, Puppy's so tired, he takes a nap--and dreams of playing apple bobbing in Antarctica, Baseball in Brazil, Checkers in Canada, Dodgeball in Denmark... and 22 other games. Who else but Nick Bruel could combine the alphabet, a counting game, a whirlwind geography course, and a screamingly funny story... all in 40 pages?

Why doesn't Kitty want to play with you?

Does that make her a bad Kitty? Or does that just mean you need to show her how much fun she's missing?

Puppy wants to play even if Kitty doesn't want to. In this counting/alphabet book we follow Puppy on his journey through the house in search of things to play with. Along the way he finds uber tons of toys under the couch. Nice fuzzy toys with bells and mouse tails on them. This has perked Kitty's interest.

After a full day of play, Puppy needs a nap. Puppy dreams of all the places and games he would like to play with Kitty. And when he wakes up... Kitty is still there. Hooray! Does that mean Kitty wants to play?

Greta's Thoughts:
In the words of the great Poe: "AGAIN AGAIN!"

What? Were you thinking Edgar Allen?

This book was great! So vivid and creative! I love how simple minded Puppy is. He really does remind me of a dog. Of course not as superior as Bad Kitty.... but still... great!

If your little one is Team Cat or Team Dog it doesn't matter. This book will have them in stitches as Poor Puppy entertains himself while Bad Kitty teaches us what curiosity does to cats.

A great bedtime book and as for me... An extra entertaining read while eating breakfast :) 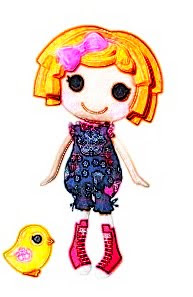