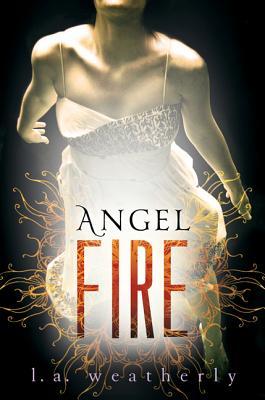 In Book Two of L. A. Weatherly’s wildly romantic, action-packed trilogy, the angels are back with a vengeance . . . and they don’t have heaven in mind.

In the wake of the Second Wave, the angel menace has exploded, and Alex and Willow are on the lam. Willow’s prophetic dream points them to Mexico City, where they connect with a fledgling group of angel killers led by the exotically beautiful Kara, an Angel Killer from Alex’s past. But the team remains suspicious of Willow, even after the more-experienced Alex takes over as leader, training them hard for a rush attack on the Seraphic Council, or “The Twelve.” This elite group of all-powerful angels is also under the scrutiny of Willow’s angel-father, Raziel, who has his own sinister plan to defeat them.

What Willow hasn’t told Alex is that there was also a mysterious boy in her dream, one she felt overpoweringly attracted to. When brooding, gorgeous Seb shows up in the flesh, he turns out to be another—possibly the world’s only other—half angel. He’s been searching for Willow all his life, and when Alex enlists this rival to help keep Willow safe, he can’t predict what chemistry will pass between them . . . or how far Willow might go to keep Alex safe. Will their love endure or spell doomsday for the human race?


Darkfallen's thoughts:
It's no secret that I love Willow and Alex....I mean seriously you would have to be not human to not love them. Everything about them is just so.....sweet!

Back into the world where angels are more of a human killing parasitic villain, and less of a holy being that most believe them to be, Willow and Alex are trying desperately to make their way across the country. Ever since their attempt to bring the angels down at their main church in Denver they have been on the run. Willows face is plastered across every wanted sign and news station. The who US is literally hunting her down. Not to mention all the angels that can spot her by her aura. Nothing is safe for them here anymore so they make their way to Mexico in hopes of a safe haven. That is until Willow starts having visions of awful things to come. Now Mexico isn't so safe anymore, in fact it's probably the least safest place they could go, but her visions says she is supposed to be there. Unfortunately it also shows her another boy that is supposed to be there. One that makes her feel things she shouldn't feel while she is with Alex. Will this mystery boy make her question her love for Alex?

With the weight of the world on her shoulders and all of humanity on the line she doesn't have a choice but to find out. The question is, if they manage to save humanity, will Alex and Willow be able to save their love as well?

This book took me on an emotional rollercoaster like I couldn't have even imagined! There was swooning, hate, anger, sorrow, compassion....you name it I felt it. And not just felt it but it consumed me. At one point I was so anger that I thought I wasn't even going to be able to finish the book...and then 50 pages further and I was crying and heartbroken. Finally coming to an ending that left me so warm and fuzzy inside that I thought I just might cry happy tears and jump up and down like a little school girl. Lol

I will say that the only reason this book isn't getting 5 stars from me is because at times it seemed a little to long in spots. Particularly I found myself slightly bored when reading from Raziel's point of view. Now yes there was a lot that I learned form his parts that I needed to know to understand what was going on, but I can't ignore the fact that I still didn't want to read his parts. Luckily he didn't have a ton so that helped.

In the end this was a great sequel in this series and I can't, CAN'T wait to get my hands on the final book!!