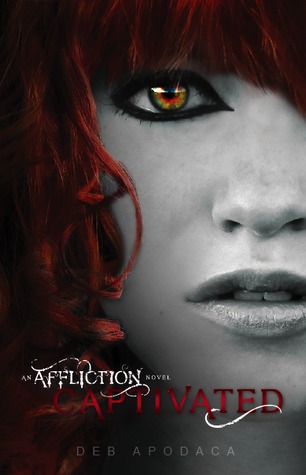 Captivated (An Afliction Novel)
By Deb Apadoca
Published June 10th 2011 by Eminent Books
Pick up your copy at Amazon today!

Synopsis borrowed from Goodreads:
"I stood close to the edge looking down at what I thought was my death. Then, I somehow ignored the water and only saw him. He looked like a dark angel on a cloud of mist holding his arms out to me. I closed my eyes and inhaled deeply. Then I jumped." Mindy

After Mindy's childhood best friend, Dean Aiken, shuts her and everyone else out of his life, she learns to move on. Years pass and she gets used to the fact that he's no longer a part of her life, but things begin to change

Mindy's new best friend, Markus Medina, witnesses Dean kill two people behind a club. Mindy has a hard time believing him, especially when he mentions that the bodies disappear. Poof! Into thin air. Markus decides he has to follow Dean around in order to get evidence that he's been killing people, so he doesn't sound like a nut to the police.

Despite Marcus' crazy theories about the possibility of Dean not being human. And not to mention the fact that he's dangerous. Mindy can't help that she may be falling in love with him. Even after hiding their feelings for each other from the world. Dean and Mindy being together stirs up dangers that neither of them could ever imagine. When she finds out about what Dean really is and the world he tried to keep her away from...it's already too late.


Darkfallens thoughts:
Ya know when you read a synopsis of a book and you think that it's going to be this great book, and then you read it and it kinda sucks? Well this is NOT that book.

This book completely lived up to my expectations. It was full of action in all the right places and there were plenty of heart melting moments to balance everything out. And then there was the ending, but I'll get back to that in a minute...

Mindy and Dean were childhood friends. That is until the night Dean comes home to find his parents brutally murdered after seeing a weird pale man go into the woods behind his house. After that everything changed. Dean stopped talking to Mindy, or anyone else for that matter, and as for Mindy? Well she kind of moved on. Made new friends. Did her own thing. And tried to not worry to much about the boy that no longer talked to her. That is until she notices him looking at her, and she can't help but to question why. Why is he suddenly always staring at her. That cold dead stare always boring into her. Also why did this seem to start around the time that Shane, the new kid, showed up? And why is it that every time Shane talks to her does she almost feel hypnotized by the this perfect new kid?

When the secrets start to unravel, and the pieces start to fall together, the real question is will Mindy pick the right guy? Or the wrong monster?

I loved this book! Yeah, okay sure there were a few editing errors, but nothing major. And I felt there were a few places where things could be sewn up a little tighter, just to pull it all together more smoothly, but in the end this was a great fast read that kept me on the end of my seat. But lets get back to the best/worst part....the ending.

Of course I can't tell you what happens at the very end, because where would the fun be in that? But what I can say is this...this author, Deb Apodaca, has guts. Most authors can't resist the urge to give us all our HEA. They always leave some glimmer of hope at the end, or they do a total fairytale moment where the guy always gets the girl, and the reader always swoons. Not here folks. At the very end she pulls the rug out from under our feet and gives us reality, and in reality things aren't always so pretty now are they? Which leaves me wanting more that anything to see where the next book in this series is going to go. Because even though hope has been taken away, I as a reader refuse to believe that, so I will hang on to hope and prey for that twist to come out of left field and make everything all okay again.

So do yourself a favor and pick this up. Join me and fall in love with Dean in a way that is usually reserved for Edward Cullen. Or Jacob depending on what team you were on. Lol *winks*