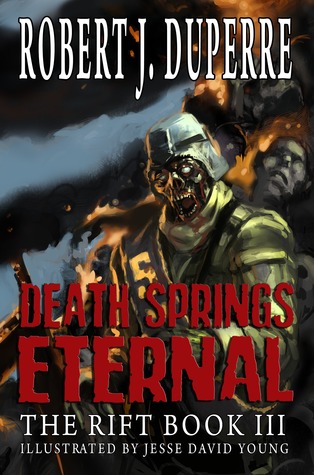 The sun rises from its slumber, melting away the winter's snow and bathing the barren land with light. The survivors once more begin their journey, braving the hordes of wandering undead, heading south for what they hope will be safer shores.

But an old threat has risen from the bowels of humanity, standing in the way of any hope for salvation. As those who remain soon learn, in a world of chaos, zombies are the least of their worries.


Darkfallen's thoughts:
First of all I just have to say that this was by far my favorite book of the series! Robert Duperre has really found his voice with this book and the writing is air tight. He paints a believable, albeit harsh, picture of the world around his characters that will leave you having nightmares.

It's been six months since the Rodent Flu brought the wraiths, zombies, and the end of the world. Six months in a world filled with not life, but death, carnage, and the undead. Six months is a long time to live when you indeed are still a breathing human being in this world after the end. In this world without hope...but that's all changing. The snow is melting off the trees, the birds are starting to chirp, and the undead and starting to drop. Could this be the beginning of something better? Could there be hope for a new world after all.

Josh, Krya, and the gang are still wandering trying to make it across the US. Hoping that once they make it south life will be better. Or that there will be life of any kind to speak of. Moving around has become easier as the undead seem to be dying a true death this time. Still their journey is anything but easy. I love the relationship between Josh & Kyra. Of course that isn't the first time you've heard me say that, but it's true. Their love is raw and unwavering even though at times it's hard to see. Even more so I love how Josh seems to grow in this book. Opening up more to Kyra and the people around him. It makes that love even more apparent.

Then of course we still have Corky and the boys. They also are moving south. In hopes of another place to hide out. Maybe even more living people. With Horace's declining heath and the some other bad circumstances things aren't going well for this group, still they are my second favorite set of characters of this series. And throughout it all there is a glimmer of hope here with them as well.

It seems as the undead fall the hope rises...If only it were that easy. While half of this book is about surviving, and hope; the other half of this book is the opposite of hope. In fact it's the place where hope goes to die. Anything good is swallowed whole here. I'm talking about the SNF army that has built up the city of Richmond. But it's how they are building it that kills the hope. The racism in this city astounds me. It physically makes me sick most of the time. I would take the zombies over these senseless hicks any day. In a time when humanity needs to band together to rise above the undead, and the government has fallen, these bastards have reverted to killing not only the zombies but anyone who isn't the right color. While I it pisses me off to no end, I can totally see this happening in real life, and that's sad.

Overall this is a book that will make you love, cry, scream, possible pee your pants from fear, and feel an anger like you've never known a book could do. Robert Duperre as not only given us a series of great horror novels, but with a journey and an ending that will leave you gasping he has painted a living breathing nightmare that will leave you wondering just who are the real monsters? I can't wait to read the last book in this series...and I'm a little scared to all at the same time.

Want a chance to get your hands on your own copy of this series? Well because Robert Duperre is such an awesome person TWO lucky winners will win their own copy of ALL three books in The Rift series! One International winner will get all three books in eBook format and one US winner will recieve all three in paperback!
Awesome right?!
All you have to do is fill out the Rafflecopter form below to enter. Good Luck!