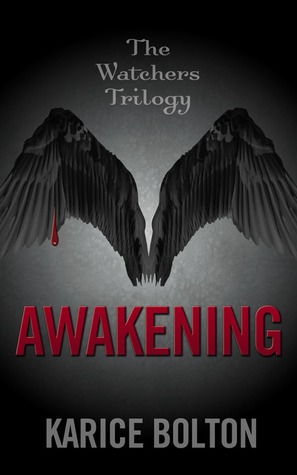 Awakening (The Watchers Trilogy)
By Karice Bolton
Published September 8th 2011 by Purely Pursistant
Pick up your copy at Amazon, B&N, or your local indie today!
Synopsis borrowed from Goodreads:

Alone in snowy, remote Whistler village, Ana tries to build a new life since losing her parents. With a cozy condo, a sweet-faced bulldog and an evening job to leave the days free for the slopes, life slips into a great routine. If only she could shake the guilt for not remembering anything about her parents and banish the night terrors that haunt her every dream.
On a whim, Ana goes out with Athen, a guy she’s just met in the Grizzly Pub... The only problem is that she feels like she already knows him.

Within 48 hours of meeting Athen and his family, Ana’s world implodes. She falls for Athen quickly and before she knows it, a past life begins to resurface. As thrilling as the revelations appear at first, she fights against the chilling information that Athen is from the underworld. Soon she begins to struggle as her own supernatural gifts are slowly unveiled, and she realizes that the nightmares she’s been having might be premonitions and not dreams at all.
It is up to Ana to decipher between fact and fiction before it is too late, and her new love, Athen, follows in her same fate - one that is lost between two worlds.

Book 2 of The Watchers Trilogy, Legions, is due out December 1st, 2011