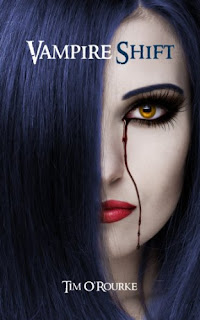 When twenty-year-old police recruit Kiera Hudson is posted to the remote town of The Ragged Cove, her life is changed forever. Investigating a series of horrific murders, grave desecrations and missing persons, with her unique ability of 'seeing', Kiera soon realises her life is in danger. But when Kiera falls in love with Police officer Luke Bishop, not only is her mind and her heart opened to a terrifying new world, she comes to suspect that Luke might be involved in the killings. In a race against time to unearth the truth, Kiera must discover the identity of who or what is behind the gruesome deaths on the 'Vampire Shift'.

Book one in the Kiera Hudson Trilogy.


Darkfallen's squeefilled thoughts:
Let me start by saying that when I first read the synopsis for Vampire Shift I was a little leery.
I mean it's talking about police work, crime scenes, murder investigations, the main chic is a cop...
To say that my Urban Fantasy radar was going off is a bit of an understatement.

More like there was a four alarm siren in my head, bleeding my brain through my ears, screaming..
Don't do this to yourself!! You don't like Urban Fantasy/CSI type books!
But....
I gave it a go anyways...
and it was...
AWESOME!!
Ok so this is NOT another one of those UR genre books.
Nope you don't find yourself sucked into a world of boring police paperwork, trying to solve a murder, while the big bad heroine chic runs around kicking butt, and saving the world.
Don't ask me why but those kinds of book tend to bore me half to death...
Chinese water torture might even be more preferable in those cases.
In fact this "big bad chic" gets her butt handed to her on more than one occasion;)
Again don't ask me why that makes me happy...but it does. Maybe it has something to do with the fact that it makes me feel better knowing that she gets her butt kicked by vamps just like I would ;)

Vampire Shift will leave you on the edge of your seat, gripping your Kindle.
No emotions are left behind here.
Tim O'Rourke makes sure to paint a picture that will not only make you swoon for his characters, but leave you utterly TERRIFIED of the dark. Jumping every time the cats start stampeding through the house in the middle of the night. Even for the not-at-all-religious wishing you had a bottle of holy water & a crucifix to sleep with.
Maybe even praying for one;)

Keira's character is well done and fleshed out.
YES she has a tough girl facade.
YES she is basically a mess with a death wish at times.
But it works for her. I love that she is all snark and attitude slaps in the face, even after she finds out that she is up against things of nightmares, that can very well kill you.
I laughed out loud on more then one occasion at her comments while she was seconds from having teeth sank into her. The best way for me to describe her is Buffy the Vampire Slayer. Which would explain why I love Keira...because I mean who doesn't love Buffy?

There are parts throughout the book that you might think to yourself,
"Wow that was random. Why did I need to know that?"

PAY ATTENTION PEOPLE I assure that Mr. O'Rourke doesn't just go throwing random, unnecessary thoughts of filler in there. Every last detail comes back around full circle. Taking you on twists and turns you never could have pictured. Taking the most insignificant, barely there characters, and turning them into OMG moments. Do yourself a favor. Stray away from the usual Paranormal Romance and jump into this dangerous world, where the humans are reminded that vampires are not friends.
Where vampires are reminded that they are monsters, a creation of all things evil and chill inducing.

That's right kids...these vampires DON'T sparkle....and I loved every minute they tried to scare the pee out of me!

Don't forget to sleep with your flashlight....

Email ThisBlogThis!Share to TwitterShare to FacebookShare to Pinterest
Labels: 5 stars and then some, book reviews, Tim O'Rourke, Vampire Shift, vampires that scare you