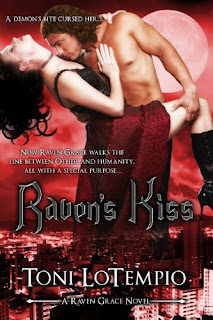 Raven Grace was a college senior with ambitions of a career in law enforcement when she met the demon Aega, whose bite turned her from mortal to Shapeshifter. Now a member of the Recovery Organization, Raven keeps the peace between humans and errant Hellhounds, trolls, wizards and the like while trying to track down Aega and bring him to justice. After a particularly dicey encounter one night with a Hellhound, she goes to the aid of a girl who’s been attacked and near death—and is amazed to find Aega’s bite mark on the girl’s arm. Determined to get to the bottom of this, she revisits the victim’s apartment and there discovers her closet is a portal to a parallel universe, where people she knows lead vastly different lives. She also gets a glimpse of the Recovery Captain there—a six foot, redheaded Scotsman named Finn McPhee, whose sexy accent and even sexier bod sets her senses aflame. Seeking answers, Finn takes Raven to the magickal underworld, where an ancient fae informs them the demon’s quest is rooted in Scottish mythology and magick. As they delve deeper into legend, the truth comes to light—Aega is only a pawn, subservient to another, darker demon…a being who knows the truth about Raven’s heritage, and who orchestrated her return to this parallel universe for the ultimate showdown. Now, Finn and Raven find their passion for one another must take a backseat to Raven’s battle with a dark force who won’t be satisfied until he’s claimed her soul for his very own…

Darkfallen's review:
So this was my first book of this nature.

Ok well kinda...here's what I mean. Raven's Kiss is labeled as Paranormal Romance, and it is, but it's different from the others I've read. This is more of a CSI meets demons, trolls, mages, shifters, and much MUCH more.

The story line was great and fast paced. I loved the idea of "parallel time" and there being another me, but not so ME running around somewhere that I can't see. In truth...I think that I have always believed this to be the case.

And know I know how to jump through!! SQA-WEEE
now just to find one of those rips in a closet somewhere....lolz

I liked Raven's voice in the book. She is snarky, strong as nails, and doesn't take crap from anyone, but she is also broken. She battles the struggles of being attacked by a demon. A demon that changed her species entirely. You see, once a mere mortal human, Raven now finds herself a Shifter. Able to shape-shift into just about anything. Which sounds cool right? Yea well most humans bitten & turned by a demon become uncontrollably evil, thusly most people/Others alike fear her. So much so that her boss at the Recovery commands her to take some time off when she is showing signs of wear. Ever since Raven was bitten she has made it her duty to take down each and every rouge Other she can get her hands on hoping to one day find and kill the demon that changes her.

It's been over a year since she was attacked...and now she finds out that he is still up to his old tricks. Vacation or not she won't sleep until he is stopped!

I really liked the story but I fear that whole "CSI" angle isn't really for me. Nothing at all wrong with the story.
The writing is great.
The plot has all the right twists.
The men are HOT!!
I never thought I could be attracted to a man with red hair, but make him Scottish?
Ummmm yea that I can get used to!
*winks*
All in all I would say if you like the "investigation" type stuff this book is for you. In fact if I was into that type of book, or movie for that matter, then I would LOVE this book. Because everything is done so well. In fact I would say it is prolly easily 4 1/2 stars as far as the writing is concerned. It's just the CSI type stuff that I just wasn't that into:)