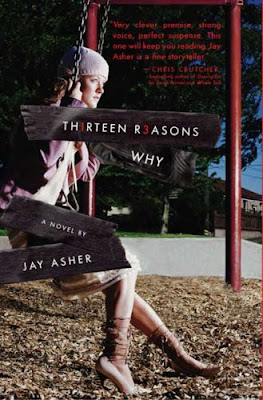 Jay Asher's brilliant first novel is a moving, highly original story that focuses on a set of audiotapes made by a girl before she committed suicide, and which explain to 13 people the reasons why she decided to end her life. Told in a highly effective duel narrative -- alternating between the girl s voice and the thoughts of a boy who is listening -- this honest, poignant story reveals how other people's actions shape, and by extension can ruin, an individual's faith in people. Intensely powerful and painfully real, Thirteen Reasons Why reveals how brutal high school can be, the consequences of spreading rumors, and the lasting effects of suicide on those left behind


This book was refferred to me by my friend SJA. I don't think she's ever rec'd me a book but I know she knows my style to a 'T' and for that I thank her.

I flew threw this book. I haven't liked a book this much since "The Rose and the Beast" or "The Weight of Silence" and before that.... well, I'll admit it... it was Twilight. Picking up that book is what started me to read as an adult. Thanks you rich woman who is making Boo-koos of money off me lolz.

Thirteen Reasons Why is a very deep emotional book. Have you ever had a rumor spread about you? I'm sure you have. Haven't we all? As long as we went to a public high school there had to be one or two floating around. Maybe a story that got twisted, someone backstabbing you with false lies just to get back at ya for hiding their Tim Allen book (don't judge lolz), or something so off the wall that when it got back to ya you just couldn't believe that someone would have the imagination to come up with a tale so unbelievable about yourself.

In the book there are two main characters. Clay who is alive... and Hannah who is Not.

Hannah committed suicide just a couple weeks back and right before the final curtain call she made 7 (audio cassette) tapes with 13 stories (side A/ side B) about the people who helped send her over the edge. Clay's name was next on the list to find out WHAT he did to send Hannah into her downward spiral.

The most amazing thing about this book is hearing the stories on the tapes. It's absolutely brilliant how the author did it. As we are listening (I guess we're really reading) Hannah speak into the microphone about this person and that (Clay has to go through all of them to get to himself then figure out who they go to next) we get to hear Clay's inner monologue about what happened when he heard That Rumor or what he was doing at That Party... It was very neat!

I was on the edge of my seat through the entire book. Of course you want everything to turn out ok... but the catcher is.... you know it's not going to. The girl on the tapes is Dead. Whatever happens... you know it's still going to end in suicide. But you can't help yourself to want everything to be alright.... and then you cover your mouth because you can't believe someone treated her that way... and then... just maybe... you hold back tears because you remember someone who treated you that way... or maybe you treated someone else that way.

I was very impressed with this author. I have to admit that I am very leary when reading ANYTHING written by a guy. I don't know why. Ok.. I'll admit it... I'm a sexist pig who only thinks that guys can write things that go KABOOM. Surely they can't write YA , can they? Well, ladies (do any guys read my reviews? lolz).... this dude totally wrote a brilliant YA book. And I am very happy to say that a boy OR a girl would find this book highly entertaining.

The creepy thing in this book is.... it all could happen. It seriously could!! But that's also the brilliance.

There isn't a heap load of detail in this book and that's probably another reason I loved it soo much. There was no talk about how someone smelled, what someone's hair reminded them of, how the air was flavored... it was as though a perfectly normal teen was just talking. That earned big mondo brownie points with me. I seriously think that YA authors now-a-days are just trying to impress us with their vocabulary. Jay Asher's book spoke to me because I had no need to dig out the dictionary and look up a 15 sylable word that (in no way in hell) a teen of today would say.

And just to leave on a fun note I'll let you guys in on a rumor about myself that is NOT true but is funny as sin.

Back in 2004 my husband landed a job and we had to move. I had been working at a factory for the past 6.5 years. On my very last day my friend Pam who I had worked with for the past 3 years came up to me and wanted to ask me something. I told her to go right ahead because I wasn't coming in the next day... or ever lolz.... And the question she had was actually a rumor she had been hearing for years.

Now... let me give you a little background story. The job that I worked is actually the same place my dad works at. We transferred down from Ohio to Alabama in 1986. He has been working there since 1978.

I had a big grin on my face because I'm seriously twisted lolz.... and asked.... What cult did I escape from?

And she looks at me as though this is a perfectly normal conversation and says... OH, the ones that drank the Kool-aid and killed themselves.

Now, back up!! Were there any survivors in that cult? They all died right? And furthermore.... didn't that happen in the 70s? Was I even born yet?

Apparently my family escaped from that... It didn't even happen in the states!! lolz... and I would have been nearly 3 months old lolz... OH!! And my brother wasn't born yet... but get this... My Dad had started at that factory in November of 1978... but I doubt the shop workers knew that (he works in the office... while i worked in the shop - where you put the stuff together).

But I grinned at my friend Pam even more, shook my head, and told her that we didn't escape from a cult.

She grinned back and told me she had always wondered but could never build up the nerve to ask me.

That rumor still gives me the giggles.... what will people think of next?

This book is about to be reborn on June 14th. Its coming to paperback and I couldn't be more excited. I hope every teen out there gets the chance to get lost in this book. It's definately something everyone should read at least once in their life. 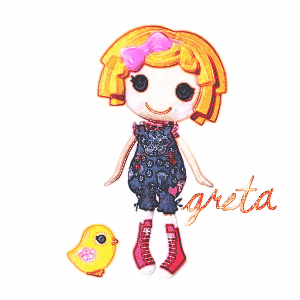 Posted by Greta is Erikasbuddy at 7:37 AM

Email ThisBlogThis!Share to TwitterShare to FacebookShare to Pinterest
Labels: Jay Asher, One of the best teen books out there, Suicide Awareness, Thirteen Reasons Why