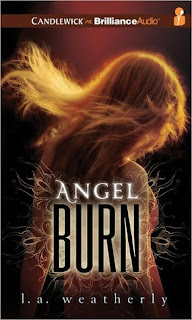 Angel Burn by L.A.Weatherly Publish by Candlewick Press, May 24th 2011. Pick up your copy today at Amazon,  B&N, or your local indie!
Synopsis borrowed from Goodreads:

Willow knows she’s different from other girls, and not just because she loves tinkering with cars. Willow has a gift. She can look into the future and know people’s dreams and hopes, their sorrows and regrets, just by touching them. She has no idea where this power comes from. But the assassin, Alex, does. Gorgeous, mysterious Alex knows more about Willow than Willow herself does. He knows that her powers link to dark and dangerous forces and that he’s one of the few humans left who can fight them. When Alex finds himself falling in love with his sworn enemy, he discovers that nothing is as it seems, least of all good and evil.
In the first book in an action-packed romantic trilogy, L. A. Weatherly sends readers on a thrill ride of a road trip  —  and depicts the human race at the brink of a future as catastrophic as it is deceptively beautiful.


Darkfallen's thoughts:
For those of us that believe in angels we believe that they are the heavenly Divine. That they are here to watch over us. Help us. Guide us through life and to our final resting place there after.

Some of us pray to them. Some of are obsessed with them. Some of us morn for the fallen. Some of us even fantasize about a hot bruiting fallen angel saving them, and by saving I mean kissing lolz. *winks* And almost everyone that has survived something they shouldn't have has heard the phase: "Your guardian angel must have been watching over you." or "You were touched by an angel."

What if I told you angels weren't the good guys?
What if I told you that almost every disease from cancer to schizophrenia was linked to them?
What would you say then? Would you believe me and fight to stop it? Or would you blindly praise them and make them stronger? Let them feed off you. Drain every ounce of energy from you until your nothing more than angel burn.

Do I have your attention now? I thought I might!

Willow lives a tortured life but seems to make the most out of it. She has never knew her dad and as spent her entire life taking care of her mother. When she was nine she left Syracuse to move in with her Aunt Jo in Pawtucket after coming home from school one day to find here mother missing. Her mother has had a serious mental condition that just seems to get worse. She is always staring out at nothing, living in another dreamland. While back in reality Willow struggles to take care of her and living with her aunt isn't exactly making it any better. All Willow knows is that she is doing the best she can considering her mom is almost catatonic. Willow also happens to be physic but since her mother isn't really available there is no telling if she inherited the trait. In fact she didn't realize that everyone wasn't the same way until she was 5. Just when it seemed like Willow's life was pretty much set the way it was Beth, the popular girl, asked her for a reading. Lets just say that after what she saw her life was never going to be the same. Not only did she know that angels exist, but she also knew their dirty little secret.

That's when Alex shows up. He has been sent to destroy her but he is smarter than your average Angel Killer and realizes that she is something different. He doesn't trust her but decides to protect her until they can get to the bottom of it. For some reason, he can't explain, no matter how hard he tries he find himself attracted to Willow. The more he feels the worse he treats her to keep her at arms length.

I could tell you more but that would just ruin it. As it is I have already done a much longer summary than I normally do, but for this book I deemed it necessary. So here are my thoughts...

First of all this book was indescribably amazing!!! I will try my hardest to find the right words but I'm not sure they exist. Willows character was so strong at times that I found myself crying for her, even when she wouldn't. When she finally broke at times even that was beautiful. Her personality just seemed to grab you and touch on a level that you FELT what she was going through. And then there is Alex. I think my favorite part about this story is that Alex is just a 17 year old kid. Granted his life isn't anything like a normal 17 year old boy and he is wise beyond his years in some departments, and completely dump in others, it just makes him great. For once you have a paranormal Ya that doesn't involve and immortal that's like 100 and a teenage human. Their relationship and their eventual love for each other is so raw it's perfect. My heart clenches just thinking about them.

Overall there isn't a single thing that I would change about this book. The new twist on angels is like a breath of fresh air. If you don't read this book than you are truly missing out. I deem this book worthy of my advice and in case you forgot what that is here you go: