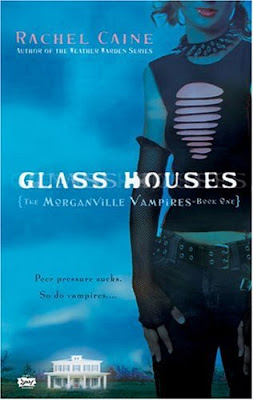 From the author of the popular Weather Warden series comes the debut of an exciting new series set in Morganville, Texas, where you would be well advised to avoid being out after dark.

College freshman Claire Danvers has had enough of her nightmarish dorm situation. When Claire heads off-campus, the imposing old house where she finds a room may not be much better. Her new roommates don't show many signs of life, but they'll have Claire's back when the town's deepest secrets come crawling out, hungry for fresh blood.

I read this book because it was recommended by a dear friend. I've heard mixed reviews on this series and decided it wouldn't hurt to go ahead and try the first book (also my bud bought it for me so I had it on hand)

I kind of feel that I should uber loves this book because of how much my friend just squees about this book. Its not a bad book but I just didn't connect with the characters like I have in other books. I will say that it did keep my attention long enough to finish it. That's always a plus because I'm such a picky pick.

The humans:
Claire is the main girly in the story. The book is pretty much told in her pov. She's an uber smart nerdy girl that has gone Doogie Howser on the world and wound up in college at 16.

I like the idea of a Doogie Howser girl but I'm wondering why Nerds are in? Maybe I would be smarter if they were back when I was a kid ;)

Michael is the owner of the Glass House and has a secret identity (to say). I really thought this was going to be Claire's main love interest but he's not.

Shane is who really digs Claire. I kind of felt the relationship between the two was kinda forced and a bit too quick but because it is a YA novel I can easily look past that. Shane reminded me of Emmett from Twilight.

Eve is the Goth Girl who lives at the Glass House. She reminded me of Alice from Twilight. She was bubbly but liked to wear black and cross bones. I really enjoyed her character but she mentions that she is goth a lot which makes me think that the author really needed to hang out with a couple goth people because in my opinion she would have been written different. I just feel that if you are Goth you don't draw attention to it. I'm sure she improves later in the series.

HAHS! But I was reminded of this: http://www.youtube.com/watch?v=gYdfGsYyALI

The Vampires:
The vampires are in no way like Edward Cullen. Not cuddly duddly or steamy dreamy. They're grody and mean and dislike anything religious because that stuff hurts them. I'm thinking they are like the "30 Days of Night" vampires. I've never seen that movie but I assume they are like that.

The Town:
What I found interesting is that Morganville KNOWS its infected with vampires. They also have certain rules and stuff that goes along with the mighty fanged ones that is very neat but I won't tell you about that stuff because it will spoil the story. I might have just spoiled the story because I told you about the vampires... but hey... I think you'll live ;)


The Plot:
I think the plot was pretty original. It was a nice change to have the vampires as the evil do-badders and the humans as the goody goods.

The Parental Units:
The 'rents (as they are called in Glass House) weren't around much and when they were they were typical YA 'rents. They kinda felt wussy to me, then overbearing, then loud mouthed, then back to mousey. They weren't bad, but they weren't model... ya know? But that's how YA works so I can't judge on that.

Age Appropriate:
There is a bit of cussing in this book mainly by the boys. There's also underage drinking and a kiss or 2. I think it would be fine for a 13 year old to read. I would say a 12 year old could read this. I would let mine... but that's strictly up to your household.

A teeny review:
Girl goes to school cuz she's uber smart. Gets picked on by some fem-bot bi-atches. Goes in search of some new diggs. Meets a gothy girl who has a place for rent. Meets a guitar boy and a big brotherly boy. Learns that everything in town isn't what it appears.

Its original and entertaining. Give it a shot if you have time.