The Fire of Dawn Blog Tour!

V.V. Aku has always believed in beautiful stories. She found the man of her dreams and her way in complex China, and wrote a fairytale of her own: The Fire of Dawn－a scintillating tale about strength, self-discovery, and a girl who dared to follow her heart.
Born and raised in The Netherlands, V.V. Aku (Veerle Ackerstaff) soon discovered that the world was a place worth exploring. After graduating high school, she set out to travel the globe until she finally touched down in China. On the border of Tibet she met Anzi Aku, a wild Black-Yi man who lives at the foot of the Himalayas. She has joined his clan and tries to find her place among the tribe and its shamans. When she’s not researching the clan’s mythology on vampires, she shamelessly gives in to the compulsion to write about the countless characters that haunt her dreams.

V.V. Aku is the author of The Fire of Dawn and Black Dusk. She has been the creator of stories since the age of three, and has a Post-Graduate Diploma in English Language Teaching to Adults from The University of Cambridge ESOL. After nearly a decade of working as an English language teacher and TEFL trainer in China, Thailand, The Netherlands, and the UK, she now devotes all her time to writing, her family, and practicing Kung Fu. The Fire of Dawn is her debut novel. You can catch up with V.V. Aku on Facebook, Twitter, Blog, or her Website. 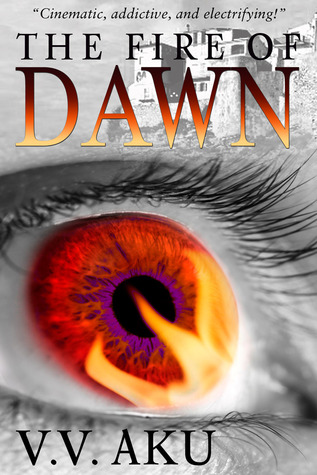 The Fire Of Dawn
By V.V. Aku
Published April 12th 2012
Pick up your copy at Amazon, Smashwords, or Create Space today!
Synopsis borrowed from Goodreads:

It’s the last day of the summer holiday in The Hague when Leah Koopmans’s carefree life as a teen is brutally flipped upside down. Her pale skin turns a dazzling gold, her senses heighten, and her muscles possess an uncanny strength. But with these exhilarating new powers comes a thirst that can only be quenched by one thing: human blood.

While her body craves for fresh victims and her heart drowns in guilt, she meets inhumanly handsome Max Machiavelli, who claims that Leah is an immortal like him. Infatuation ignites into blistering passion when Leah joins his coven in Amsterdam. But as the mysteries shrouding her sudden change to immortality unravel, she quickly learns that her aversion to taking life isn’t the only thing that sets her apart from this group of herculean strangers.

From the picturesque canals of Amsterdam to Corsica’s limestone cliffs and the untamed Siberian wilderness; from first loves to fierce battles, The Fire of Dawn is an extraordinary tale packed with romance, betrayal, and bloodsucking suspense that will keep you on the edge of your seat till the very last page.

And now on to the guest post:
Five things you don't know about V.V. Aku:

5 Things you didn’t know about me.
1.        Like most teens, I made my parents’ life a living hell. I hated the fact that I couldn’t be free. I saw school as prison and the years of mandatory education as unjustified jail time. Above all else, I yearned to spread my wings, turn eighteen, and explore the world. The first thing I did after graduation? I bought an open ticket to Asia and I haven’t lived in the Netherlands since.
2.      My life with a Himalayan tribe in China is no secret. But what most people don’t know about my marriage to wild, Black-Yi man Anzi Aku, is that I never said, ‘I do,’ or ‘Yes, I’ll be your wife.’ His family presented my parents with tokens of silver and expensive liquor. Normally, they would have offered my dad a dozen goats, a yak, and two horses, but realizing that these animals wouldn’t fit in their suitcase back to Holland, Anzi’s family kept it low scale.
3.       I absolutely adore animals of all kinds. I’m not a diehard vegetarian, but I never thought I would be able to endure seeing an animal suffer until I moved to China. It has been one of the biggest culture shocks I’ve had to deal with, but an important part of integration and acceptance into my husband’s Black-Yi clan. My first duty as his wife was to shave a freshly slaughtered pig (after I had nearly tore the ears off my head listening to the hog’s terrified squeals) after which the village shaman ceremoniously cut the poor animal into pieces and put me in charge of cleaning its intestines and stuffing them with blood, meat, and mushrooms.
4.      Another part of Black-Yi integration was looking like a true Black-Yi women. Soon after I started my life in the mountains of northwest Yunnan, Anzi’s family began insisting that I not only dressed like one of them, but also tried my best to be seen as one of them by their ancestors. In order to complete this trying endeavor I needed to sacrifice the virgin skin of my forearms. The shaman’s wife gathered herbs and ash then took a bunch of needles and began tattooing round dots on both of my arms. The dots represent coins which I will take with me to my afterlife.
5.      Four months ago, my husband and I found out that I was pregnant. Although we were both ecstatic, my pregnancy discomforts soon kicked into high gear. With a sudden supernatural sense of smell, life in China became unbearable. Everywhere I went, I wanted to gag on the foul blend of garlic, ginger, spices, stinky feet, unbrushed teeth, and days-old sweat. But this prenatal torment was trumped by one other. Chinese food became the most disgusting thing to eat in the world.
Want to find out more silly facts about me and my life in China. Join me on Facebook.com/VVAKU or read my blog on www.fireofdawn.com/1/feed
And because V.V. Aku is so awesome one lucky winner will get their own eBook copy of her new paranormal romance book, The Fire Of Dawn! This giveaway is open internationally!! All you have to do to enter is leave a comment answering this question:
If you had a life of immortality what would you do with it?
Then fill out the Rafflecopter form below!
Don't forget to leave your answer to the question above in the comments section of this post.
a Rafflecopter giveaway