Welcome to our stop on the Beautiful Lies blog tour hosted by Bloomsbury Press!
Today we have a sneak peak at the book and one lucky winner will also get a paperback ARC! How awesome is that?! But before we start let me introduce you to the book... 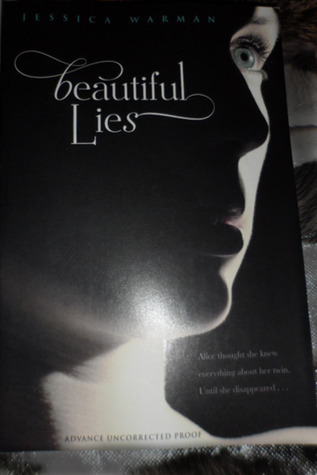 A shocking, ambitious mystery full of twists and turns from the globally embraced author of Between.

Rachel and Alice are an extremely rare kind of identical twins—so identical that even their aunt and uncle, whom they've lived with since their parents passed away, can't tell them apart. But the sisters are connected in a way that goes well beyond their surfaces: when one experiences pain, the other exhibits the exact same signs of distress. So when one twin mysteriously disappears, the other immediately knows something is wrong-especially when she starts experiencing serious physical traumas, despite the fact that nobody has touched her. As the search commences to find her sister, the twin left behind must rely on their intense bond to uncover the truth. But is there anyone around her she can trust, when everyone could be a suspect? And ultimately, can she even trust herself?

Master storyteller Jessica Warman will keep readers guessing when everything they see-and everything they are told-suddenly becomes unreliable in this page-turning literary thriller.


And now for the sneak peak...
Below is an excerpt from the first chapter of BEAUTIFUL LIES by Jessica Warman, published with permission from Bloomsbury Children’s Books. Setting the scene: Rachel and Alice are identical twins hanging out with their friends Holly, Nicholas, and Kimber at the local carnival. They are all about to get on the Ferris Wheel when Alice decides not to ride at the last second. The “I” in the passage below is her twin sister Rachel.
And before I have a chance to realize what’s happening, my sister slides out of the seat we’re sharing.  “You can ride with Holly, Rachel.”  She begins to back away, waving with both hands.  “I’ll catch up with you after.   I want a candy apple!”
She turns on her heel and rushes away from us.  It is such a typical Alice move: restless, impulsive, but I feel like she’s only acting this way because that’s the kind of behavior everyone expects from her.  Almost immediately, I lose sight of her in the thick crowd.
Holly climbs into the seat next to me.   Nicholas is still standing beside the head of the line.  He shrugs at us before stepping away, giving the finger to the ride operator’s back.
“I guess that worked out,” Holly says, clutching her purse against her chest.  Without any warning, she raises her voice and screams, “I love you!” at Nicholas.
The operator leans over us.  With one hand, he pulls the metal bar downward, securing it tightly against our laps.  “Enjoy your ride.”  His voice is flat as his eyes stare into mine.  His breath on my face is so sour, so sickening, that I have to look away before I gag.
Our seat rises into the air.  Beneath us, previous riders climb out, replaced by Kimber, who doesn’t have a partner.
I search the crowd for my sister, looking everywhere for a glimpse of her red hair, for a sign of the face I recognize so well.
The wheel turns slowly at first.  Then it begins to speed up.  Across the field, the band starts to play.  I recognize the music.  It’s “Sleepwalk” by Santo and Johnny.  It was my parents’ wedding song.
“Holly.”  My voice barely breaks a whisper.  The music is too loud, the ride too fast.
“Whooo!”  Holly kicks her feet with glee.  Even though it’s fall, she’s wearing open-toed high-heeled sandals, her toenails painted a creamy shade of pink.  She raises her arms, making spirit fingers in the air, and I get a whiff of her perfume.  The smell turns my stomach again.  I could almost throw up.
“Alice.”  My voice is louder, but Holly still doesn’t hear me.  She stands up a little in her seat, the metal bar pressing against her thighs, to blow kisses at Nicholas.
From high above the crowd, I can spot Uncle Sam on his stilts.  I can see strands of customers, their bodies woven into glistening ropes of flesh as they line up for food.  I can see the candy apple stand, its neon light glowing red against the crowd.  But I don’t see my sister anywhere.
Long before our births, we shared the same space in our mother’s body.  We are what’s known as monochorionic monoamniotic twins, which means we are identical twins who grew in the same amniotic sac, sharing one placenta.  It’s a pretty rare phenomenon; when it does happen, both twins don’t always survive, let alone thrive as we have—especially back when we were born.  The chance of our simple existence is a marvel of nature. No matter where I am, no matter where she is, I have always felt her presence from somewhere within myself.
Until this moment.  It is as though the thread connecting us has snapped, like something deep within me has been severed.  She is simply gone.
BEAUTIFUL LIES is available in stores and online everywhere beginning August 7, 2012 from Bloomsbury Children’s Books. Jessica Warman is also the author of Between, Where The Truth Lies, and Breathless which have received six starred altogether. She lives in Pittsburgh, PA.
Intrigued? Well one lucky winner will get their own copy of Beautiful Lies! All you have to do is fill out the Rafflecopter form below.
This giveaway is sponsored by Bloombury Press and is open to U.S. residents only per their request.﻿
﻿
a Rafflecopter giveaway