"Waiting On" Wednesday is a weekly event, hosted by Jill at Breaking the Spine, that spotlights upcoming releases that we just can't wait to get our sticky fingers on. 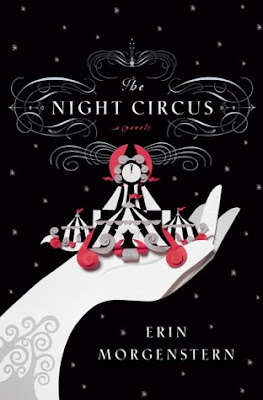 
The circus arrives without warning. No announcements precede it. It is simply there, when yesterday it was not. Within the black-and-white striped canvas tents is an utterly unique experience full of breathtaking amazements. It is called Le Cirque des Rêves, and it is only open at night.

But behind the scenes, a fierce competition is underway—a duel between two young magicians, Celia and Marco, who have been trained since childhood expressly for this purpose by their mercurial instructors. Unbeknownst to them, this is a game in which only one can be left standing, and the circus is but the stage for a remarkable battle of imagination and will. Despite themselves, however, Celia and Marco tumble headfirst into love—a deep, magical love that makes the lights flicker and the room grow warm whenever they so much as brush hands.

True love or not, the game must play out, and the fates of everyone involved, from the cast of extraordinary circus per­formers to the patrons, hang in the balance, suspended as precariously as the daring acrobats overhead.

How cool does that sound? Sure it reminds us a bit of Cirque Du Freak with the circus just showing up in town with maybe with some tiddles of Beautiful Creatures flair... but how cool is that?!!!

And what can we say about a book that just makes us want to ride dangerous motorcycles in the Cage of Death?

(note: Darkfallen had to handcuff Greta and restrain her legs with rope as they entered the Cage of Death... for some reason Greta started thinking it might be a bad idea just to show your love for an upcoming book. Greta doesn't feel that the Cage of Death really counted as excitement because of her limited mobility and the forceful shoving on Darkfallen's part. But Darkfallen reassured her it was still legit as she revved up the motorcycle they were riding doubles on causing Greta to scream like a little girl, which Darkfallen took as excited squeals.)

So, now that you've heard what our CAN'T WAIT book is... What's yours? Drop us a comment so we can find out what has you on pins and needles.

Email ThisBlogThis!Share to TwitterShare to FacebookShare to Pinterest
Labels: Breaking the Spine, Erin Morgenstern, Must have Nows edition, The Night Circus, Waiting on Wednesday