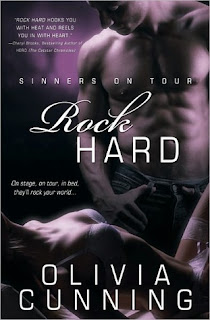 Rock Hard by Oliva Cunning
Pick up your copy today at
Amazon & B&N!
The man in your life will thank me *winks*
Synopsis borrowed from Goodreads:
Sinners’ lead singer, Sed, had his heart shredded when Jessica left him to pursue her dreams,so when she dances her way back into his life, he's not sure he's ready for her brand of pain, or pleasure, again. When she convinces Sed to engage in a benefits with benefits relationship, things seem to be going his way, until one of his fans catches their explicit public display of affection on film and posts it all over the internet. Will Jessica ever trust Sed again? And has Sed become the man of Jessica’s dreams or is he just posing to get what he wants?
Now for some nummy thoughts:
In this installment of the Sinner's series we get to live Sed's story. Which OMG is flaming out!!

Sed is the lead singing of the Sinners. He is also a pushy asshole control freak who had his heart broken by Jessica, and thusly is a womenizing man whore. These are all things we know from Backstage Pass. But what happens when Sed & Jessica get reunited in the most not-so-pleseant circumstances? Can the two of them overcome their own personality disorders long enough to see the real person underneath all the bullshit? Or will Sed be left standing there with his heart in shreds once again as they part ways....

Ok well one thing for sure is that Sed & Jessica's reunion is smoldering HOT!! I mean they have an animal like physical attraction to eachother that drives not only them but you the reader crazy. But remember when I said in Backstage Pass that not only did Ms. Cunning give me lusty num nums, but she made me fall in Love with her characters?

Welps chickadees I'm proud to say that she did it again....only this time is wasn't for the main character! Please don't get me wrong I learned so SO much about Sed, and thusly love him even more for it but....uh hu yep there is always a BUT and in this case a very hot one *giggles*

So without giving anything away, because no one likes a spoil sport, I'll tell you this. There is so much more depth coming into this series. So much more drama. Where in the first book it is mostly about Brian and Myrna, in Rock Hard Olivia does an awesome job of bringing some roundness to all of the Sinner's. And while I thought that I was madly, deeply, hopelessly, lustfully in love with Brian Sinclair well....ok so maybe I still am *swoons then shrugs* But oh Trey Mills, Trey Mills, Trey Mills!

*Greta pinches Darkfallen*
OWWWWW!!! WTH was that for??

Oh right I'm turning into a groupie aren't I? hehehe Thanx for snapping me out of it *winks*

All in all this was another hot installment of The Sinner's and I am so excited to see what is gonna happen to the band next, and OMG Ms. Olivia Cunning how long until I get Trey's story?? *whines like a 2 yr old* Pa Pa Pa please I NEED him!!
*Greta pinches Darkfallen....AGAIN*

OWWW shit I'm doing it again aren't I? CRAP!! *facepalms*I better run before my arm gets any more bruises!! LMAO