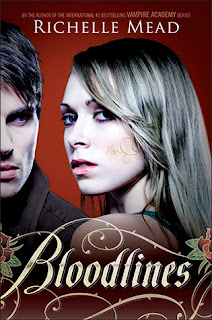 When alchemist Sydney is ordered into hiding to protect the life of Moroi princess Jill Dragomir, the last place she expects to be sent is a human private school in Palm Springs, California. But at their new school, the drama is only just beginning.

Populated with new faces as well as familiar ones, Bloodlines explores all the friendship, romance, battles and betrayals that made the #1 New York Times bestselling Vampire Academy series so addictive - this time in a part-vampire, part-human setting where the stakes are even higher and everyone's out for blood.


Darkfallen's thoughts:
As a HUGE fan of Vampire Academy I couldn't wait to get my hands on this book...so first off many, MANY thanks to the fine people at RazorBill for this ARC! I mean it....I LOVE you:))

For me this was a solid 4 stars. Actually at first it was even a little hard for me to connect with, but I think that is mainly because I was so used to Rose's voice, and probably because I connected with Rose. Whereas Rose was all gut instinct, take-action-now-clean-up-later, Sydney is more think, think, and THINK so more. She is very smart, and analytical. Nothing gets past her. So I think that is where I was feeling a bit unattached at first....because I am so NOT that kind of person. I am more like Rose ;) While it was nice to see how exactly Sydney's brain works, there were times when it felt over-explained if that makes sense.

We learn so much about the Alchemist world that was left to the side in VA. It's nice to see the other side of things while still keeping the world I fell in love with there. I wasn't under the impression that Adrian was going to have such a big role in these books as he does but, am I ever so grateful. GAWD I still love that man....(and this from a girl that was team Dimitri) I am so super mondo glad that it looks like he might actually get a love interest that will treat him right...however it won't be easy, and there is already a hint of a love triangle, but I can't wait to see how that pans out.

In fear of giving to much away I just want to say that...YES I thought this book could have been a little better. Much like the first VA book it is kinda just setting up a lot of details for what I am sure is going to me a great series! I so can't wait for the next book:)There are a few concerns I have for the series though, and that it is going to be follow the exact flow of VA when it comes to relationships, and I would really like to see some change up.
Here is what I mean, but PLEASE these are just my predictions for how I see things going...nothing more

Adrian & Sydney= Rose & Dimitri (except for Adrian will win the triangle battle with Trey, leaving Trey the odd man out, but not until after a long heartbreaking battle, just like the Rose, Dimitri, Adrian relationship.)

Eddie & Jill= Lissa & Christian (again here is two people that shouldn't be together because of crossing social barriers, and this has NOT happened, I just see it going there

AGAIN this is simply how I see it heading, but in no way are these spoilers, and I so hope that I am wrong *winks*
Wanna get your hands on this ARC?
I know you do!
So here is what you have to do....
1.) This contest is open to followers only, so if your not already lost in the wastelands somewhere, join us!
2.) This contest is open to the US, Canada, & Europe residents.
3.) Wanna earn extra points? Tweeting, posting to Facebook, your blog, goodreads...all will earn ya extra point!
4.) Last, but certainly NOT least, fill out the form!