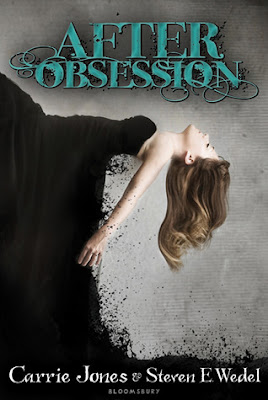 After Obsession
By Carrie Jones & Steve Wedel
Published Sept 13th by Bloomsbury USA
Pick up your copy today at Amazon, B&N, or your local indie!
Synopsis borrowed from Goodreads:

Aimee and Alan have secrets. Both teens have unusual pasts and abilities they prefer to keep hidden. But when they meet each other, in a cold Maine town, they can't stop their secrets from spilling out. Strange things have been happening lately, and they both feel that something-or someone- is haunting them. They're wrong. Despite their unusual history and powers, it's neither Aimee nor Alan who is truly haunted. It's Alan's cousin Courtney who, in a desperate plea to find her missing father, has invited a demon into her life-and into her body. Only together can Aimee and Alan exorcise the ghost. And they have to move quickly, before it devours not just Courtney but everything around her.

Filled with heart-pounding romance, paranormal activity, and rich teen characters to love-and introducing an exciting new YA voice, Steven Wedel-this novel is exactly what Carrie Jones fans have been waiting for. Meet your next obsession.


Darkfallen's thoughts:
Carrie Jones has partnered up with author Steve Wedel, and what did they come up with? A eerily genius tail that will leave you scared to turn off the lights, and chills running up your spine long after you close the book.

Alan is up-rooted from football star at his high school in Oklahoma City to a small town in Maine that doesn't even have a football team when his cousin Courtney loses her dad. A life without football? For Alan it doesn't get much worse than that. That's until he starts to notice Courtney's weird behavior. After meeting Courtney's friend, Aimee, he begins to realize two things...
1.) Maybe not everything about Maine is going to be bad.
2.) His cousin Courtney, along with most of the towns people, are not acting right. Something is up. People here are acting violent and this small river town has lost more than it's fair share of people to the river.

The journey that Alan & Aimee have to take to save the town from an evil that is trying to possess it will scare you in the best ways. At one point I felt like a complete child sleeping with the night light and jumping at every little noise. It's like reading The Exorcist, there is just simply no way to read this without getting the chills. But beyond that is the building relationship with Alan & Aimee. They are both a little different in ways that would label them as freaks to most people. I loved watching them grow closer. How they were able to open up and be themselves around each other when they never could around other people. It made everything all that much more sweet. When there wasn't spiders running up and down my spine in terror, there was butterflies in my stomach. Fluttering around every time Alan & Aimee were together.

Overall this book was fantastically spooky with just the right amount of swoon-worthiness. I have been dying to get my hands on another Carrie Jones novel and this one does not disappoint!!