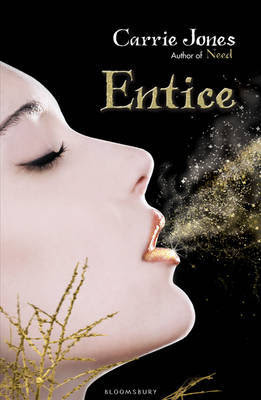 Entice (Need #3)
By Carrie Jones
Published January 3rd by Bloomsbury
Pick up your copy at B&N, Amazon, or your local indie today!
Synopsis borrowed from Goodreads:

Zara and Nick are soul mates, meant to be together forever.
But that's not quite how things have worked out.

For starters, well, Nick is dead.
Supposedly, he's been taken to a mythic place for warriors known as Valhalla, so Zara and her friends might be able to get him back. But it's taking time, and meanwhile a group of evil pixies is devastating Bedford, with more teens going missing every day. An all-out war seems imminent, and the good guys need all the warriors they can find. But how to get to Valhalla?

And even if Zara and her friends discover the way, there's that other small problem: Zara's been pixie kissed. When she finds Nick, will he even want to go with her? Especially since she hasn't just turned...she's Astley's queen.


Darkfallen' thoughts:
okay more like a rant so hang onto your life vest...
I want to start by saying that I know that there is A LOT of bad reviews out there for this series. Most of those reviews complain about the same few things.

The use of immature dialogue.
The similarities to Twilight.
The descriptive writing is lacking.
This is where I tell you that I am NOT one of those such people.
First of all the language: While others found it annoying, I found it cute, sweet, funny, and at times heartbreaking. May I remind you all, that while most of us who read these books are older, this is still a YA series and thus the characters are young, immature, teenagers. I sometimes think we forget that. Thusly Zara's rambling and choice of phases reminds us of her age and I heart her for that.
Secondly the how Twilight debacle: Can I just say that it is time that we move on? I will always LOVE Twilight on an almost obsessive level, but we simply can't compare every YA novel to Twilight, and every author to Stephanie Meyer. If you want every character you read to be Bella or Edward well then of course your going to be disappointed. Take these characters for who they are and let down the barrier and I promise you will enjoy the ride. Who knows maybe you'll come to love another. (I know this sounds like a recovery for a break-up but Twilight pretty much "broke-up" with all of us when it ended)
Thirdly the descriptive writing:  It could have been a bit better in the first 2 books but Carrie Jones has made up for it in Entice.

Ok enough of the soapbox. Lets get on with it!
****WARNING!! If you haven't read the first two books DON'T read this review, it contains spoilers.****
Poor Zara can't seem to catch a break. She loses her father in Need, loses Nick in Captivate, and broken is a word that barely comes to describe her in Entice. After turning into a pixie she is left questioning herself. Also worried that she is going to become the evil monsters that she fears. Her biggest fear has now become of herself. Her love for Nick pushes Zara to her limits. She is willing to try anything to get him back, including trusting Astley, the pixie King. We learn so much more about Astley and you will find yourself hearting him by the end of the book. Despite the fact that he is completely in love with Zara, he too risks everything to help her get back her true love Nick. If that's not love than I don't know what is. Every step of the way they find themselves up against another deadly road block. Even the pixie counsel has been compromised. When you have tried everything, and your back is against the wall, you begin to wonder is it even possible. Will Zara and the gang be able to get Nick back, or lose him forever?
Will Astley become more than just the pixie King to Zara?
Will the town of Bedford make it out alive?

While Captivate is by far my most favorite in this series, Zara has grown so much in Enitce. Lets just say that Zara will find out that being a pacifist is overrated when it comes to getting Nick back from Vahalla. Somewhere along the way I found myself wanting to hug Astley. I was almost mad at myself for this. I felt like I was betraying Nick somehow, but what can I say the guy is all hot and dark side emo. Whats a girl to do;) For risk of spoilers that is all your getting from me.

I leave you with the right questions to ask. Now go, run along now, pick up the book, and find the answers!!

While your here check out our upcoming Halloween event & Blog Hop, Zompacolypse 2011, and join in on the fun!
Posted by Darkfallen at 12:00 AM