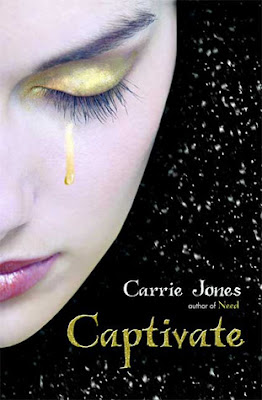 Captivate (Need #2)
By Carrie Jones
Published January 5th 2010 by Bloomsbury
Pick up your copy at Amazon, B&N, or your local indie today!
Synopsis borrowed from Goodreads:

Zara and her friends knew they hadn't solved the pixie problem for good. Far from it. The king's needs grow deeper every day he's stuck in captivity, while his control over his people gets weaker. It's made him vulnerable. And now there's a new king in town.

A turf war is imminent, since the new pixie king, Astley, is moving in quickly. Nick nearly killed him in the woods on day one, but Zara came to his rescue. Astley swears that he and Zara are destined to be together, that he's one of the good guys. Nick isn't buying it, though Zara isn't as sure -- despite herself, she wants to trust the new king. But it's a lot more than her relationship with Nick that is at stake. It's her life -- and his.


Darkfallen's thoughts:
I fell in love with Zara's compulsive internal ranting in Need. I became attach to everything about her world. Who knew Pixies could be so SO evil?! Well Captivate takes you places you don't wanna go but in the best way possible. It's beautifully bitter, tragically sweet, and I Heart everything about it.

Zara and the gang are back at it. Now that they have imprisoned the pixie king/her father and is people they think all is well. They couldn't be more wrong. While trying to decide what to do with her father once and for all more trouble is lurking, ready to attack the town of Bedford. New pixie kings sense that Zaras father is weak and they are going to claim his territory. Thing is these pixies make her fathers look friendly Disney characters. Will Zara be able to protect her town from the new pixies and their uncontrollable needs? And if so what price is she willing to pay to fight for the people she loves?!

"Pixie Tip: Pixies are blue. Cookie Monster, Groover, and other Muppets are also blue. Do NOT confuse the two. Muppets dont try to kill you...usually"
LOLZ

This is what makes this book great. There is heart and soul poured out on the pages, but your are going to have a few gut retching laughs along the way too! I don't want to be a spoiler bunny but I will say this, you are gonna be heartbroken. You are gonna need tissues. And even though you are gonna feel like you can't go on, you'll find you can't put this book down either. Don't say I didn't warn you;)

Now go do what you have to do to get your hands on this book.
Buy it, borrow it, rent it, download it, steal it if you have too, but you have gotta READ this book!

While your here check out our upcoming Halloween event & Blog Hop, Zompacolypse 2011, and join in on the fun!
Posted by Darkfallen at 12:00 AM