The Unwanteds by Lisa McMann: Review 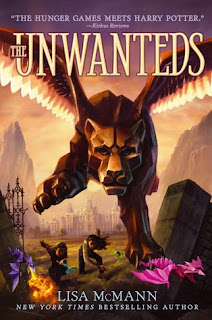 The Unwanteds
By Lisa McMann
Published August 30th by Aladdin
Pick up your copy today at Amazon, B&N, or your local indie!
Synopsis borrowed from Goodreads:


Darkfallen's thoughts:
This book was my first EVER middle grade book.

Yes yes I AM that girl who has never read Harry Potter. While I watched all the movies I just never had a real desire to read the books, but I'll tell this book just grabbed me. From the title, to the synopsis, to the cover...I just needed to see what was behind the cover. And what I found was amazing!

This book takes you the into a sad, gray, bleak world or Quill. From the first pages you can't help but feel sorry for these people. For these kids who get punished for any form of expression. There is absolutely no free will here. And, as if that isn't bad enough, if you get caught breaking these rules the punishment is DEATH....or so everyone thinks.

It's the day of the Purge. The day when all the 13 year old kids are lined up and labeled. You are either Wanted and thus go on to Wanted University. Or your Necessary which means your not really smart enough to be wanted, but you would make a good work horse so they decide to keep you around. Or your Unwanted, and if this is the case it is a hot bus ride to the death farm where you will meet your fate in the lake of boiling oil. Twin brothers Aaron and Alex are the sons of 2 Necessary parents, but Aaron is Wanted and Alex...? UNWANTED!

Alex and the rest of the Unwanteds go to meet the fate, but little do they realize their fate isn't death. Not even close. In fact they got the better end of the deal. Living in a secret magic world where they are not only free to be themselves but it is ENCOURAGED! As Alex and his friends build their magical talents Alex can't seem to let his brother go. That's the thing with twins...it's a bond that just can't be broken. Or so they thought. It's not until the two worlds collide that Alex realizes his brother's true nature. Will the secret land of Artime be able to survive the wrath of Quill? Of will the magical world crumble and the Unwanteds finally meet their fate....DEATH?!?!

Well of course I'm not going to tell you. Your going to have to pick up this book and see for yourself! I will say that I was shocked at how easy I found myself being pulled into the story. I never thought "middle school" level books could reel me in, but I was so wrong. I would love to see this as a movie one day. I kept picturing the Red queen from Alice an Wonderland meets Harry Potter. This is definitely a series to look out for!