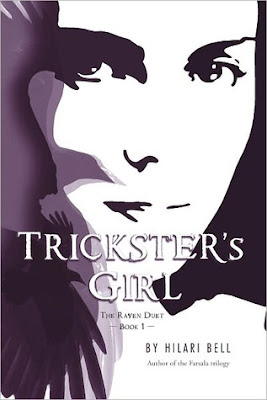 The night Kelsa buries her father, a boy appears. He claims magic is responsible for the health of Earth, but human damage disrupts its flow. The planet is dying.

Kelsa has the power to reverse the damage, but first she must accept that magic exists and see beyond her own pain in order to heal the planet.


Darkfallen's thoughts:
It's 2098 and bioterrorist have released a tree plague that is killing the rain forest in South America. There has also been an unexplainable increase in terminal cancer cases. Fifteen year old Kelsa knows all to well about this cancer. She is about to learn even more about the tree plague. After burying her father she meets a mysterious boy, Raven. He claims she is the key to saving the earth from this deadly plague that is slowly spreading across the globe. Will Kelsa be able to complete the journey, and reverse the damage that has been done? Not just the damage to the earth, but the damage left by losing her father?

This book starts out when Kelsa has to bury her father. She is torn, broken, angry, and lost. You immediately feel a connection with her. Shortly after she meets Raven and that's when thing start to get interesting. I really like the premise for this book. The whole "old magic," that has long been forgotten saving the earth from the humans that are destroying it. I love the supernatural twist of Raven, the Trickster. It was nice to see something outside of the usual weres, vamps, fae, and angels category. I do have to admit I have kinda a soft spot for Native American folklore, so when I first met Raven I was excited to see where Bell would take it.

I am sad to say that while it was an interesting read, it was a bit lacking for me. I kept waiting for a romance that wasn't coming. The name kind of implies your gonna get some swoon-worthiness, but not so much. Also the fact that the Trickster, by legend, is a bit of a player I was really sad that I didn't get to see some of that here. Also the ending was unexpected. I don't mean like "Oh I didn't see that coming." More like it just didn't feel like an "ending." Maybe it's just me but it definitely felt like it needed about 50-60 more pages. Don't get me wrong it does leave you wanting more, and I will read the next book in the series, but more because I desperately want to see a deeper relationship between Raven and Kelsa.