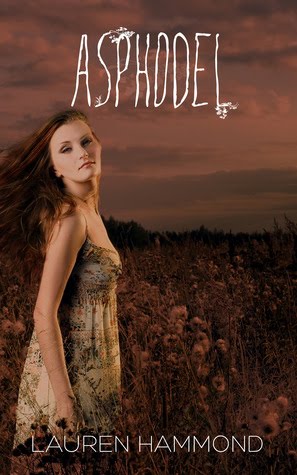 Persephone has been running for her entire life. Running from the humans to keep her immortality a secret. And running from a man who haunts her dreams. Not a man but a god, who will stop at nothing until he gets what he wants. And what he wants most, is her.

Trapped in the realm of the dead, Persephone plans to return to the land of the living. The underworld is a terrifying place where ghosts roam freely, three headed dogs patrol the gates, and it’s a living grave where the rules of earth and the warmth of the sun no longer apply. But then, something unexpected happens. Persephone finds herself falling for the god who abducted her, the god who has chased her for five thousand years, a god who is none other than death himself, Hades.
Ripped out of the underworld by Zeus, Persephone must find a pomegranate to return to the realm of the dead and to her beloved. Consuming only a seed of the fruit of the dead would bind Persephone to spend her life beneath the earth’s core with Hades. But Zeus has reduced every pomegranate tree in the world to ash. Except one. Persephone must locate that one remaining pomegranate tree, a quest that could ignite a war between the two mightiest of the god’s. A war that could cause Persephone to lose the only family she’s ever known or give up a love that comes only once every five thousand years.


Darkfallen's thoughts:
YAY another Lauren Hammond book!
That's exactly what I said when I found out about this book. Lauren Hammond and Greek mythology? What more can you ask for?!

Now I know you see those 3 stars up there and are wondering why. First off let me state that I enjoyed this book. I was intrigued by the take on Hades & Persephone's story...but I just felt that it was lacking that Lauren Hammond sparkle. Or should I say dark intrigue?

There were several parts that felt slightly rushed, and while I really REALLY wanted to feel all school girl squee/swoon of Hades I just wasn't given the chance. Which led to the relationship between Hades and Persephone feeling forced and rush. Now it wasn't like in most books when the relationship is rushed and you just aren't buying any of it...because I was so buying it. I wanted them to be together and love each other. But there just wasn't enough build time there for me to get so attached that my heart would be ripped out when it all fell apart. And as Nine Inch Nails says...In the end everything all falls apart. I just wished there would have been a little more feeling and building there so when the time came it would break me. YES that's right I'm complaining that I didn't cry or have my heart broken. Wow what a masochist am I?

In the end I still can't wait for the next book in the series. I need more of this story I need more of the love I saw starting to bloom, and I hope I get it. A part of me wishes this wasn't a YA series so I could get EVEN more. *waggles eyebrows* Still my previous statement stands...Lauren Hammond is an author to look out for. If you haven't read her stuff yet you have no idea what your missing! Start my picking up A Whisper To A Scream, then He Loves Me, He Loves You Not, and then find your way to Asphodel. You'll be glad you met this author.