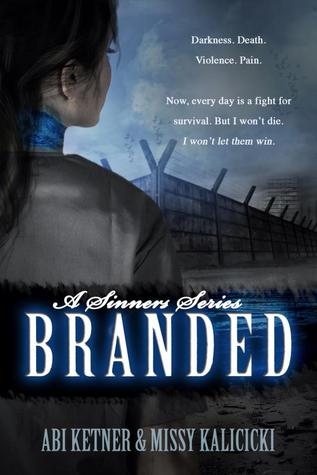 Fifty years ago the Commander came into power and murdered all who opposed him. In his warped mind, the seven deadly sins were the downfall of society. He created the Hole where sinners are branded according to their sins and might survive a few years. At best. Now LUST wraps around my neck like blue fingers strangling me. I’ve been accused of a crime I didn’t commit and now the Hole is my new home.

Now every day is a fight for survival. But I won’t die. I won’t let them win.

The Hole can’t keep me.

The Hole can’t break me.

I am more than my brand. I’m a fighter.

My name is Lexi Hamilton, and this is my story.

Darkfallen's thoughts:
I don't usually read dystopian...for some reason I just can't get into it, but boy am I glad I gave this one a go! It was awesome!!!

Lexi lives in a world where if you get convicted of the of the seven deadly sins your branded and forced to live in a community called the Hole. It's an awful place to live so when she finds herself convicted of lust and thrown in the hole she doesn't know how she is going to make it out alive. That's when she meets Cole. He's a guard assigned to her. He risks his life to save hers on numerous occasions but it's not allowed for a guard to have a relationship with a sinner. Can Lexi prove her innocence and get out of the hole before someone finds out about her feelings for Cole?

This book was just...WOW. Amazing! The world building was phenomenal. And what an awful, filthy world it is. I felt so bad for Lexi. And I couldn't help but swoon over Cole. He's so sweet and tough at the same time. Then there was his dog, Zeus. Zeus had me laughing out loud on multiple occasions. I just couldn't get enough of him. He was seriously on of my favorite characters and he can't even talk! LOL

Overall this book will transport you to another world. One filled with heartbreak and despair. It will leave you on the edge of your seat and begging for more long after you turn the last page!!